Ok, so the snow’s not sticking, but I was a little shocked to be getting snow this early in October.  Around Halloween, I expect it.  It’s snowed on Halloween before, and I have not been shocked by it.  But on October 9? That’s a new one for me.

It was a busy weekend; I went to Minnesota to visit my sister, and we attended some college homecoming festivities there.  Friday night we attended a formal gala event, and about 9:00 someone came over to our table and told us it was snowing.  Of course I had to drag my sister outside and get a pic in the midst of the mini blizzard.  Seriously!  It was not a nice “It’s a Wonderful Life” snow . . . it was wind-driven craziness.  The pic looks nice, though, and you can barely tell that behind us the wind was driving the snow in a mad sideways line. 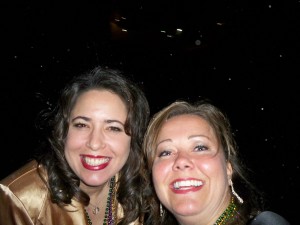 All I know is if this is a hint of the winter to come, however, I am seriously thinking of hibernating.  We in the Midwest just got done with winter!  We were having blizzards well into April.  WE NEED A BREAK.

Mother nature, are you listening?!