I’ve been spending most of this week in frantic preparation for the year ahead, mostly in hopes that the year won’t be so . . . well, frantic.  It’s logic that only I can have, I guess, but the real goal here is to make this year as smooth as possible.  Last year involved traveling between two buildings, new classes, and new textbooks that didn’t come in until the last possible second, so it set the tone for a very hectic year.  For one reason or another, it just didn’t seem like I had the chance to sit down and plan things out the way I wanted to.  I was, as they say, flying by the seat of my pants.

So this week I’ve taken over the kitchen table with books, notebook paper, and colored pens, planning things out unit by unit.   It’s so uncharacteristic for me, really.  I might plan out the first unit or so, but I’ve found that any advance planning usually falls to the wayside about three hours into the first day of school, for one reason or another.   As of now it looks like I have the first two months (at least) planned out in both my middle school and high school grammar courses.  I almost feel smug. 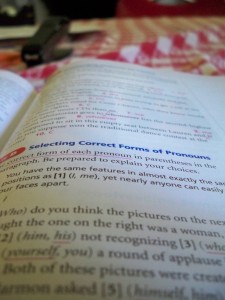 I’m a little disheartened by the “Back to School” sales this year.  Usually all the stores run deals on notebooks: 10 for $1, or ten cents each.  I buy them by the box and keep them in my classroom for that inevitable excuse (“But I don’t have any paper!”) and then I sell the notebooks to the students for my cost.  Most of them are amazed that I would charge just ten cents for a notebook, and I tell them to be patient for the good sales and go get a box themselves.  It’ll last them the year and beyond.  Of course, most of them aren’t going to scour the ads and wait for notebook deals, so they’re content to buy them from me.  But this year the price went up; all the stores ran notebook deals for 15 cents each.  I still bought them by the box, but I have a feeling that former students who know about my little “store” (yes, they still stop in for notebooks even though they’re not in my class) will be thinking I’m trying to hustle them for that extra five cents.  It’s been ten cents a notebook forever.

My kids’ school supply lists amuse me.  Yes, I know that it’s important for teachers to specify the correct supplies to get, but each year they seem to take on a Mafia tone.  “NO bookbags with wheels!”  “Elmer’s glue — DO NOT buy the “no run” type!”  Capital letters, bold text, underlining, the whole bit.  I suppose elementary teachers can do that; elementary kids are supposed to have school supply lists.  After the elementary years, however, teachers resort to more simplistic demands.  “Please bring a notebook to class” or “Writing utensils are recommended.”  And we know darn well that there will still be kids in November who claim (whether from obstinacy or with justification) that they don’t have school supplies.  Needless to say, the cheap notebooks come in handy.

There’s always something exciting about the beginning of the school year, and I’m not sure if it stems from embarking on a new adventure with new classes 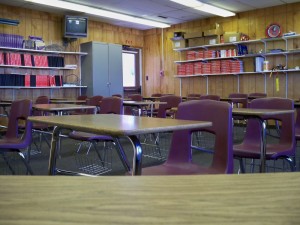 or if it’s a leftover emotion from my own days of being the student.  I don’t remember many other first days of school, but I remember the first day of 7th grade so acutely that it makes me wonder why I have stored these memories in my brain for all these years.  Perhaps it’s because 7th grade required going into a new building; perhaps it’s because a couple weeks prior to that day, I had finally shed my tomboyish long hair and opted for my first perm and shoulder-length cut.  A grown-up cut.  Of course, I wasn’t used to having bangs, so I kept pushing them off my forehead, which meant that my 7th grade picture made me look like I was wearing a wig, but no matter.  I felt cool on that first day of school, and my biggest fear was that the 8th graders would reject me.  In junior high (back then we could call it that), it was us vs. them: the 7th graders vs. the 8th graders.  It was just the two grades that shared that one hallway where all the classes were held.  Thus, as a 7th grader, it was imperative that you had a good relationship with the 8th graders, otherwise your school existence could be made rather miserable.

And so I walked into the junior high building at an absurdly early hour on my first day of school — a characteristic that would follow me in later years.  In fear of being late, I am usually way early, and that day I wanted to draw as little attention to myself as possible.  So, my plan was simple: be early, and just blend in with everyone as they came in.

I was the only one there, of course.  I tried my locker combination a few times, found it fairly easy to operate, and spent the next few minutes decorating my locker.  Little magnetic mirror on the inside of the door, a few pictures of people I would see everyday (but it was a great honor to be represented pictorally in a person’s locker), and a few cutesy baskets to hold pens, pencils, and a few tubes of my newest addiction: lipstick (Wet & Wild, of course).

Setting up my locker took all of about four minutes.  Just as I was trying to figure out what to do next (the hallway was deserted still), the doors down the hall opened, and the Queen of 8th grade walked in.   She was what every girl wanted to be: beautiful, popular, and a fashion icon.  She intimidated me, of course, and I tried desperately to look busy behind my locker door.  Straighten the mirror.  Move pens from one basket to another.  Hang coat on the opposite hook.  Dang.  What now?

And suddenly, a presence beside me.  “Hi!” she said in her cute valley-girl voice.   “I love your outfit!”

I looked down at my outfit: jeans and a bright pink sweatshirt that said “Paris” on it.  She liked my outfit?  I stammered out a “thank you.”

“This year is going to be great, don’t you think?”  she asked in her perky, bubbly sort of way.

“Uh, yeah . . . ” I replied, not quite sure what to say about a question that evoked judgment about the future.

“Well, I’m going to go get my locker set up.  See you later!”  Off she went to the lockers on the opposite wall, her bag of locker decorations clinking while she walked.

I had been graced by the Queen.  She liked my outfit.

Thus began my 7th grade year.  And she was right — it was a great year.

I knew that somewhere I had a picture of me on this first day of school.  Too bad I didn’t remember how unflattering it was.  Oh well . . . chalk it up to teenage angst. (I think my annoyance is stemming from my mother, who was behind me fussing with my hair.  Note the front of my hair pushed way off my forehead.  Some habits die hard!) 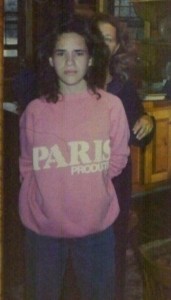 (Scanning this picture wouldn’t have made it any better, so I didn’t take the time.  It’s a picture of a picture.)

2 Replies to “Gearing up”