The other night I finally decided on what flooring to put in our kitchen and new dining/miscellaneous room.  I wanted laminate so it would be easy to change out when/if we got sick of it, and I also wanted something that brought a retro flair to the rooms.  For months I’ve been toying with the idea of black-and-white checkerboard flooring, but I kept getting hung up on the fear that my house would look like a diner rather than a cozy kitchen with a retro flair.

Well, I’m over it.  There aren’t very many non-wood laminates to choose from, and I ran across this flooring at Home Depot. 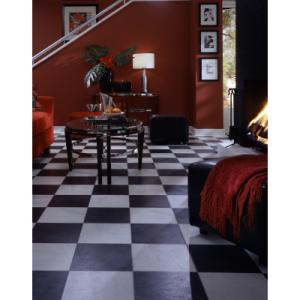 It’s a slate-look checkerboard, and it’s the slate look that I was attracted to.  It’s not a stark, shiny black and white that would show every ounce of dust and dirt in the house.  The floor is textured like slate and the colors are more muted than the checkerboard vinyls I had previously studied.  After much indecision (me? indecisive? how odd!), I bought the flooring.  Bonus: I bought the flooring after I signed up with Ebates and received $92.00 in cash back.  Worth every penny, I tell ya.

The order is still processing.  Since I need 21 boxes of the stuff, I imagine it’ll take awhile.  At this point, however, I don’t care how long it takes; all that matters to me is that I finally made a decision.