I honestly don’t watch much TV, partly because there’s not much good on these days, and partly because I’m too busy doing other things.  I tend to get hooked on one or two shows and watch those exclusively; that is, until I tire of them, and then I move on to bigger and better things.

A few years ago, the show Deadwood on HBO was my ultimate favorite.  This could be because I’m already totally obsessed with that town (Deadwood, SD) — its rich history, its cozy little home in the middle of the Black Hills, the old west look.  True, the town has lost much of its authenticity due to the advent of gambling (almost every building is a casino of one sort or another), but it’s still a great place to visit.

The show, unfortunately, had very little resemblance to the actual town of Deadwood, or at least the way it was “back in the day.”  I highly doubt even the roughest cowboy let the f-bomb drop from his lips a few times per sentence, so HBO tended to go a little bit overboard there.  It was the actual dialogue I loved; almost like a roughened version of Shakespeare.  It was one of the few shows where I had to pay close attention to the dialogue, for the characters had a way of making the simplest statement complicated, and that doesn’t even include the “colorful” language that went with it.

But alas, all good shows must come to an early end, or so I’ve discovered over the past few years, and Deadwood was shelved. 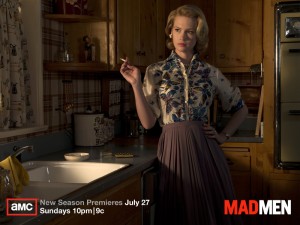 It wasn’t until a few months ago that I discovered Mad Men — an AMC drama set in 1960. After reading some fellow Mid-Century fans praising it, I decided to get in on the start of the second season, and since then I’ve used Netflix to get up to speed on the first season.  It’s that good.  The characters are dark, the setwork meticulous, the social norms scary.  Today we cringe when we watch Betty Draper drive her kids around, unseatbelted, in the family station wagon, all the while blowing billows of cigarette smoke into the back seats.  How much has changed in 40+ years!

I think all of this adds to the show’s appeal.  It doesn’t try to sugarcoat the past.  Instead, it scoops up society’s bad habits and flings them in front of the camera for all to see and remember.  In the end, we all seem torn by an odd mix of emotions: nostalgia for the past with a twist of relief for a new generation.