I don’t normally do movie reviews, but I rely very heavily on reader comments on Amazon and Netflix before I watch a movie, so why not spread the word about movies I like as well?  This past weekend, while trying to find a movie to enjoy after a long day of work, I stumbled upon a movie called Searching for Sugarman.  I kept clicking past it, not thinking it looked like anything good. Who cares about where Sugarman is — whoever he is?  But then I noticed that the movie had a nearly perfect rating out of several hundred reviews.  So, I took another look.

It turns out that Sugarman is the nickname of a 1970s singer-songwriter named Rodriguez.  Never gaining popularity in the United States, his recording career fizzled out after a couple of years, even though his hippie-era music and lyrics fit right in with the Bob Dylan-type music that was so popular at the time.  Because Rodriguez was a little late to the scene is the reason that his music never took off; after all, the US had been getting a steady dose of anti-establishment hippie music for a few years and perhaps there wasn’t room for yet another peace-loving guitar strummer.

However, I think that any good singer-songwriter will find a niche eventually; it just depends on what part of the world really needs that music at that time.  Turns out that Rodriguez’s music struck a chord with apartheid-riddled South Africa.

The problem was that Rodriguez never knew that his music had sold half a million copies there.  When his career failed to take off and his label eventually dropped him, Sixto Rodriguez faded out of the tiny spotlight he was in and settled into regular life in Michigan, eventually working in the demolition business.

Fast forward twenty years … a journalist became curious about where Rodriguez had ended up after his brief career.  Part of the reason why no one had searched fro him is because the rumor mill had a fantastic story about the night that Rodriguez supposedly killed himself — in front of an audience.  For years it was passed around as true, and no one thought that the rumor may just be a bunch of crap.

So, as all good “driven journalist” stories, this one didn’t give up.  He kept digging until eventually his story about his search reached Rodriguez’s daughter, who promptly contacted the journalist, eventually leading to a phone call from the man himself.

I couldn’t help but smile as the journalist recounted the night he received a phone call from this artist.  In fact, the movie sets up the viewer to believe that the rumored on-stage suicide was really what happened to Rodriguez, and as the mystique of this man grows, so does our own curiosity.  Imagine finding out that Elvis was still alive and that he decided to give you, his biggest fan, a call to say hey.  That’s how it felt to this journalist, and his excitement comes across to the viewer at full blast. 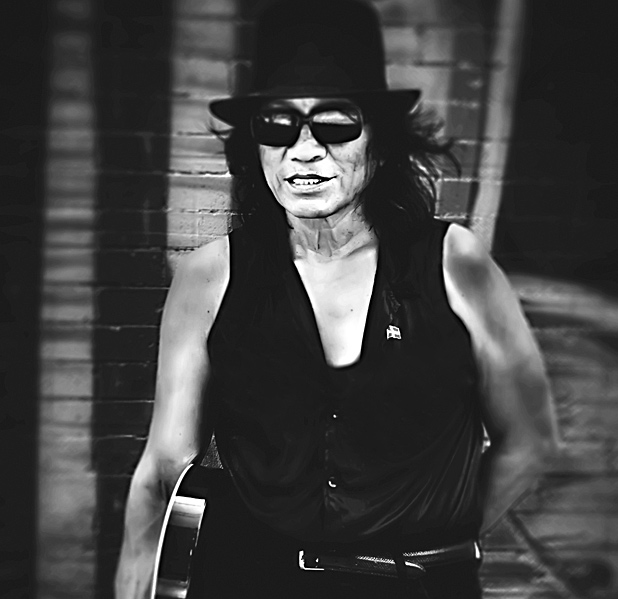 Finally about halfway through the documentary, we meet Rodriguez.  We first see him in dark profile, then in an interview setting.  Despite being out of the public eye for decades, the man has the “rocker” look down pat, but he comes across as extremely shy as he hides behind his dark glasses.   The documentary takes us on a journey to South Africa as he plays his first concert in over 20 years to a packed arena.  The aging songwriter, clad in black, looks every part the Johnny Cash of folk singers as he owns the stage as if he hadn’t been working a blue collar job in his “other” life.

Movie reviewer Marshall Fine (from the website Hollywood & Fine) nicely summed up the overall parallel of Rodriguez to his sudden thrust into fame that he sought 30 years before:

“And that’s the beauty of this film: that it captures the resurrection of a dream. There is something so even-tempered, almost Zen, about Rodriguez that this sudden revival of a dream deferred, while obviously gratifying and fulfilling for him as an artist, doesn’t change him as a man.”

I always enjoy documentaries that tell stories I have never heard, and this movie entertained me from beginning to end.  It’s always refreshing to hear the stories of humble people who do things not for fame and fortune but simply because they enjoy doing something.  It’s refreshing to know that for every computer-aided Barbie or Ken doll out there who is groomed to be a face rather than a true singing talent, there’s someone like Sixto Rodriguez who cancels them out, so to speak.