A few weeks ago I wrote a post regarding some starburst flatware that I had picked up in various stores and my quest to identify the wide variety of patterns I encountered.  Read the original post here.  As I described in that post, what I thought would be an easy task turned into a frustrating series of dead-ends as I tried to match up the plethora of patterns to definite names.

Then I received a most helpful email on Etsy from a fellow Etsyer named Wardrobecat.  She took the time to correct my futile attempt to identify the pieces and provided oodles of great information.  Here is her email here:

I just ran across your website that had a post dated 7-18-12 talking about your recent purchase of many different styles of flatware similar to Mar-crest “Citation”.

I happen to own a full service for 24 of this pattern, as well as having many new-in-box samples of it. Yes, I realize that I have gone a bit overboard in buying this stuff, but I just love it. I use one set of 12 for everyday use and keep another set of 12 in storage for when I have guests. Many of my pieces are nearly mint. Many I have found in thrift stores for 10-29 cents a piece, and others I must admit that I have paid a lot on E-Bay and Craig’s List.

So anyway, the true Marcrest Citation piece in your photo is the one on the far left. It should be marked “stainless steel USA” near the base of the blade. It will not show the word Mar-crest. Every other type of utensil made in this pattern will have the words “Mar-crest stainless steel USA”, but for some reason the knife does not have the word Mar-crest.

The knife that you thought was the real one, second from the right in your photo, I am fairly sure is a pattern called “Starette”, made by the National Stainless Company in Japan, which is often marked as “NSCo”. If it has the word Japan, it definitely is not Marcrest (Marcrest will always show “USA”).

I hope this helps you weed out the many variations of similar styles made by different companies. Good luck finding pieces to add to your collection!

Here is some more info, just to add to the multitude of starburst designs!

The Mar-Crest pattern that you like is called “Citation Futuristic”. There are two additional patterns made by Mar-Crest that are called simply “Citation”. All three feature different starburst designs. The Futuristic pattern has three stars on a wavy handle; Citation variation 1 (often called MCF-1 by online consumers) has five large stars on a tapered handle with a rounded tip; Citation variation 2 (often called MCF-2) has three small stars and four swirling lines on a relatively straight handle that has a slightly square/round tip. I have included a photo showing all three together.

Sorry it is not a better photo, I tried several times and kept getting glare spots. This is my original photo taken on 8-26-12, and you may use it if you wish. 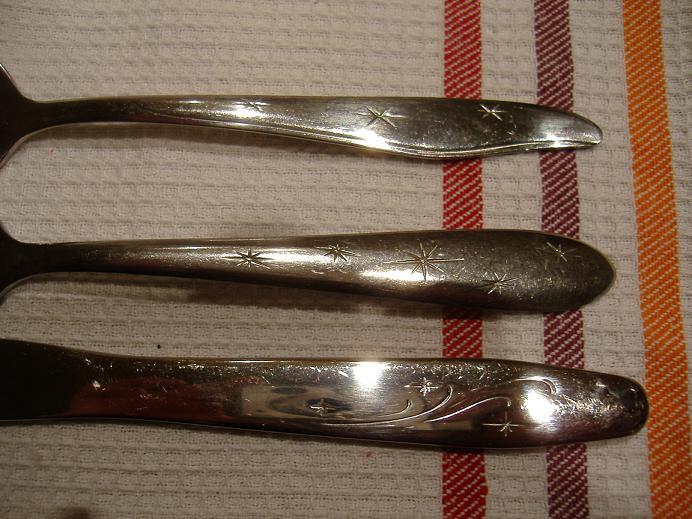 Needless to say, I am eternally grateful to Wardrobecat for the helpful information!  I look forward to adding more pieces to my collection and seeing which one is truly my favorite, as it seems to vary each time I set a table with them.