A few months ago I received some pieces of Mar-crest Citation flatware as a gift.  I had fallen in love long ago with the starburst pattern on the handle, but I figured that actually finding a set of such flatware was going to be nearly impossible or ultra expensive.

Oh, how wrong I was.

It started with that set.  I noticed some other small bunches of starburst flatware on eBay or Etsy, but being the impatient person I was, I wanted a full set instantly.  There were a few auctions for brand new boxes, but you can imagine how much THOSE went for.  <sigh>

Fast forward to last Thursday, when my significant other and I went thrift shopping for the express purpose of finding some good retro stuff.  What we found were a whole bunch of pieces of starburst flatware, and by the time it was all said and done, I had a pretty good set of it going.  At ten cents per piece, it was a bargain!

I took a brief glance at the flatware in the store, but I was just so excited to find this stuff that I just instructed my significant other to grab all the pieces he could find and call it good.  It wasn’t until I got home — no, wait … it wasn’t until I started to write this post — that I realized how many different pieces I actual had.  What I thought to be two different patterns going on actually turned into seven.  Yes, really.  How many different styles of starburst flatware can there be? 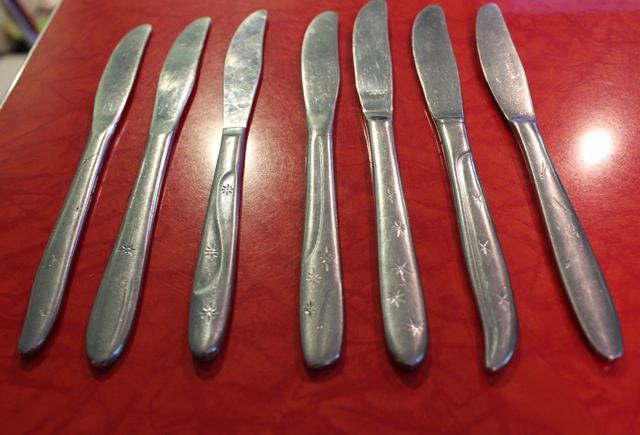 The more I looked at these patterns, the more confused I became.  The pattern on the left was what I was sure was Mar-crest Citation, but the the one second from the right looked like the same thing.  There was a subtle different in the style and placement of the starburst, but neither one was marked.  And what about the others?  None of them had distinctive markings except for a couple that just said “Japan Stainless Steel.”  Doesn’t help me a out a bunch.

After some research, I’m fairly certain that the second from the right is indeed Mar-crest Citation, and the one on the left is an imitation. I thought one of them might be a pattern by Wallace called Bright Star.   Here’s a page from a 1958 catalog from John Plain & Company. 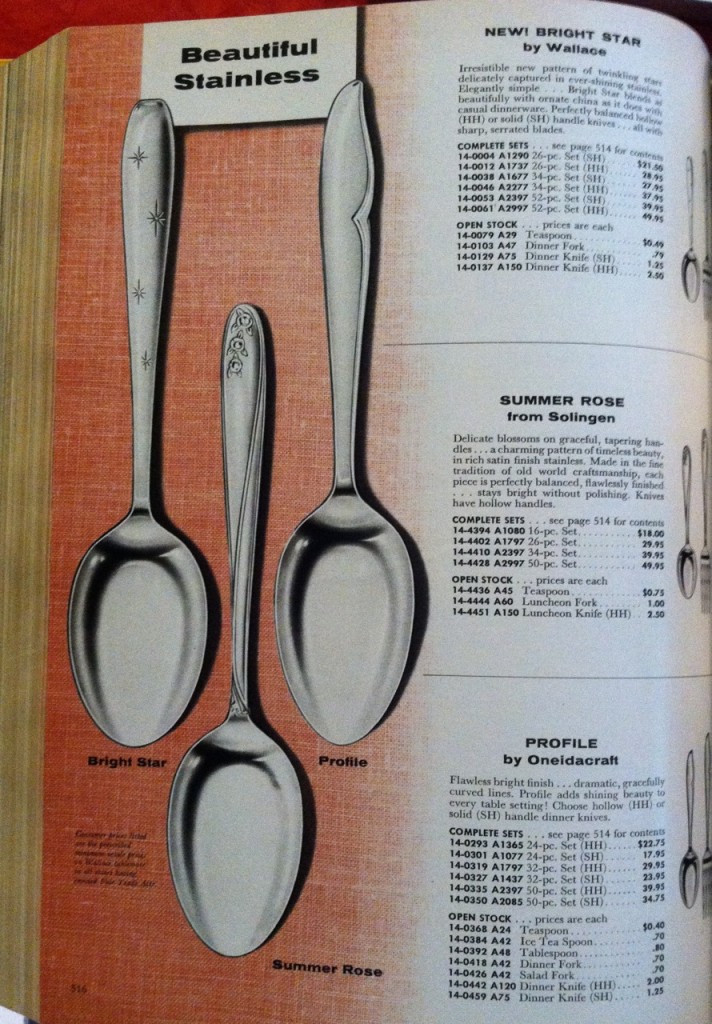 Four stars on the handle.  But once I started looking at all the patterns on the knives, none seemed to match exactly.  So no Bright Star.  <sigh>  So I try to identify each piece individually.  There’s what I think is the Citation:

Then I have a smattering of others.  This first one I have found identified as Utica Silver Sheen:

This next one is Everlasting EV2:

The next one I found some pieces of from an Etsy sale, and that information identifies this pattern as Americana Star.

I think I’ve given myself a headache from squinting at pictures on the internet trying to identify these pieces.  Anyone know what these are?