Last night around 8:15, I had just changed into my jammies, twisted my hair up and under a clip, and washed all the makeup off my face. As I was feeding my boys a bedtime snack, I noticed an orange glow emanating from the window. A storm had been steadily making its way south, but ended up to the west of us, and the sunshine was just beginning to peek out from under the clouds. I looked out the window and noticed that the bats had already make their appearance, and they made quite a show as they flitted around the sky, silhouetted against the orange glow of the sky.

Suddenly, I realized, “What am I doing? I need to grab my camera, get into the car, and drive to the highway and capture this!”

So I did a quick-change, grabbed the camera, and hopped in the car. (Too many trees around our house to get a good shot of any sunset.)

What an awesome sky! My pictures don’t do it justice, because I was stupidly watching bats rather than taking pictures of the light before it darkened some, but you get the idea. 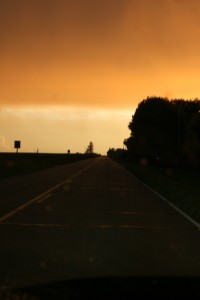 The sky went from orange …. 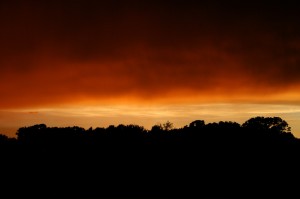 To a burnt orangey-red …

And to the west and south, the storm kept building. Note the impressive updraft in the clouds: 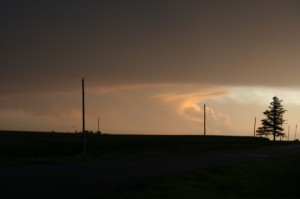 I’m always willing to take storm pictures as long as the storm is somewhere else. When it’s over my head, though, you can find me cowering in the basement, hanging on the NOAA radio’s every word. <sigh> Storm chaser I’ll never be.