One of the most gratifying reading from the 1955 American Home magazines comes from the futuristic ideas that always seemed to exist in magazines of that time.  So much had happened in the previous fifty years to bring peace and happiness and an easier life overall to the American housewife.  It seemed that the majority of the drudgery could be eliminated by machine: washing machines, dishwashers, push-button stoves . . . one could only dream about what other inventions would come along in future years.  It’s no surprise, then, that in 1955 people were dreaming about “The Kitchen of Tomorrow.” 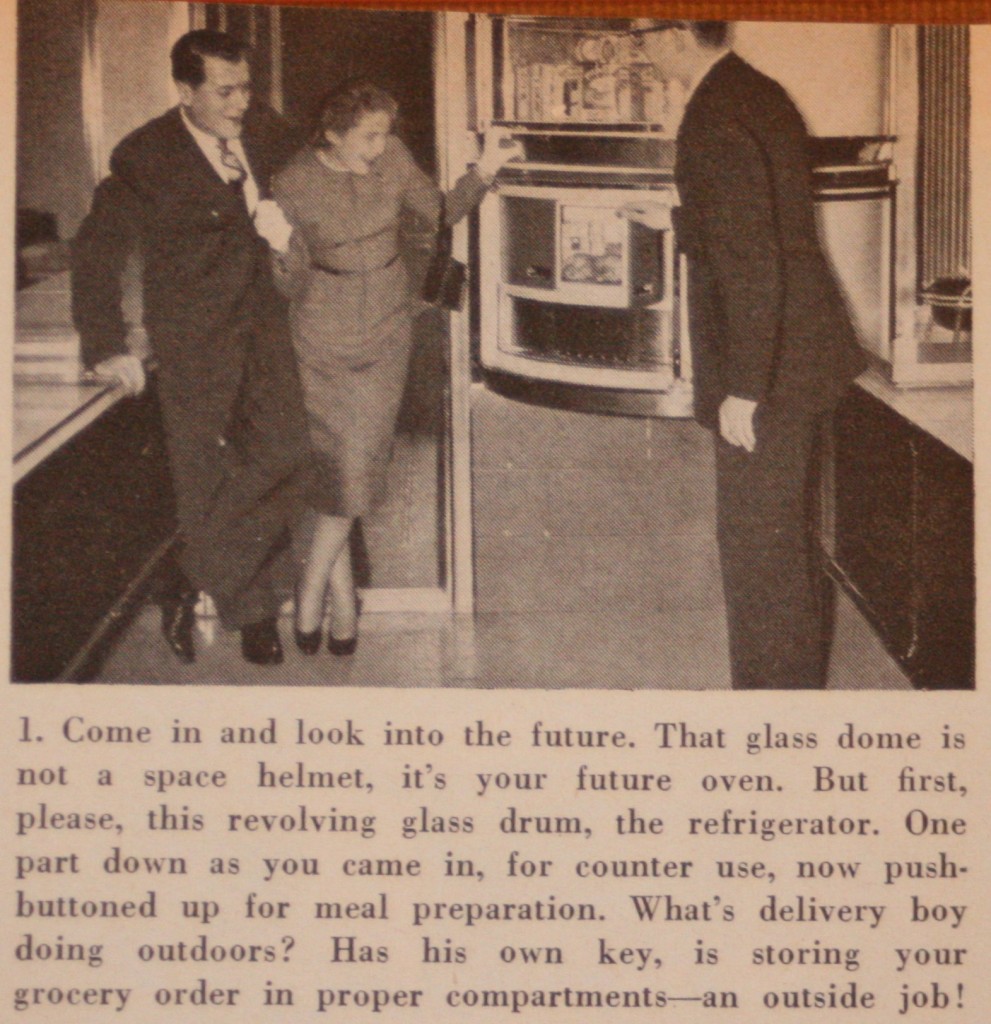 I had to read the text on this picture a few times in order to understand it completely.  They lost me at the “delivery boy” reference.  Evidently it seems that the grocery store delivery boy would somehow place grocery items into the fridge from the outside of the house, which seems a little . . . odd.  But futuristic! 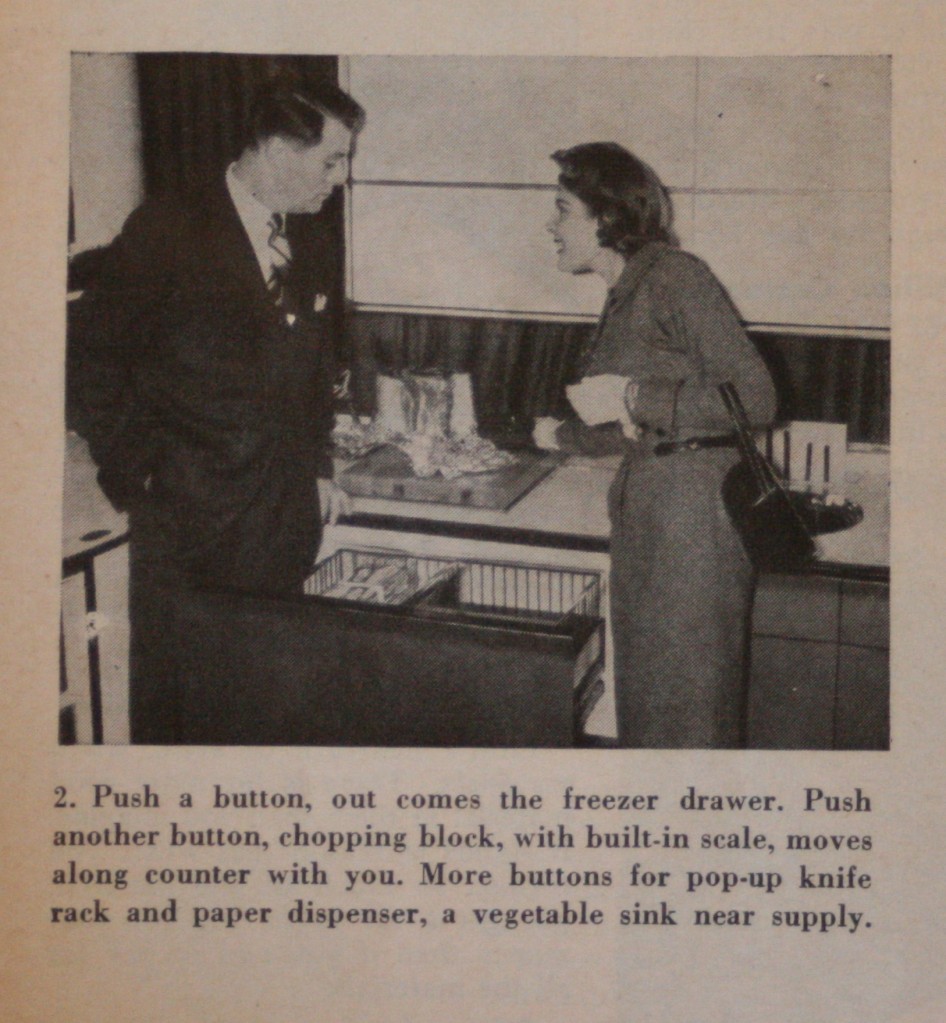 Buttons!  MORE buttons!  I understand the appeal of push-button technology, yet the practical (or perhaps cynical) person I am realizes that buttons (and the electricity associated with them) stop working sometimes.  A lady with a kitchen like this would be calling the Button Repair Guy . . . a lot. 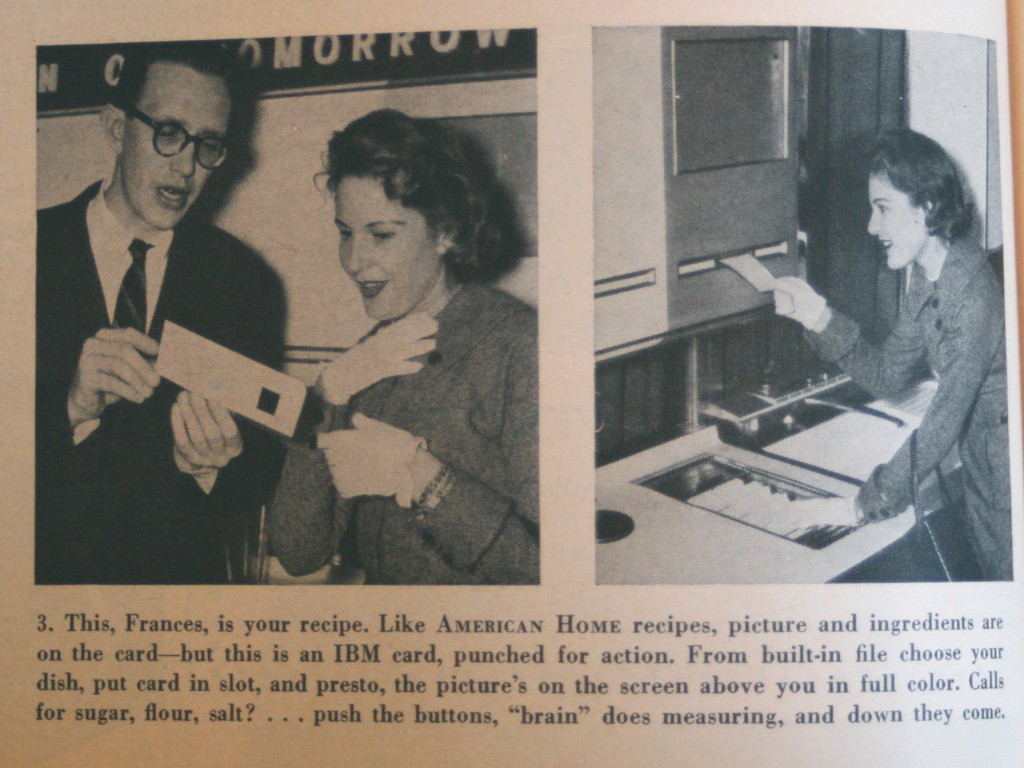 And after this, they’d use big floppy disks to store recipes to display on their Apple IIe!  The technology seems ridiculous to us now, but it’d be the modern-day equivalent of having a laptop on the counter while you cook, which I do quite often.  Unfortunately, no one thought about what would happen when the card became damaged and ended up dumping 2 cups of salt into your batch of chocolate chip cookies. 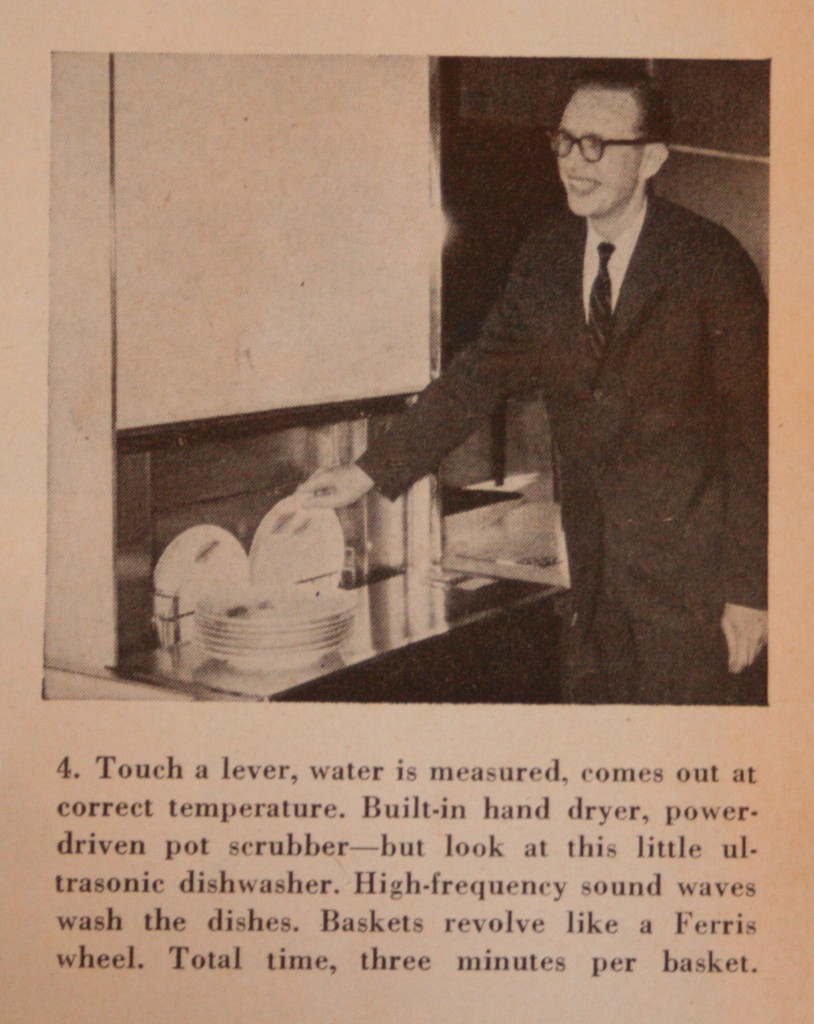 A revolving dishwasher basket!  This would be useful, of course, if you were feeding a farm crew of 25 and were short on dishes.  I think most people are content to load the dishwasher and let them all be washed at the same time.  Ultrasonic cleaning, no less — a dream machine of the green movement.  Did they actually make a prototype of this machine?  Did it work?

Something tells me “no” on that one. 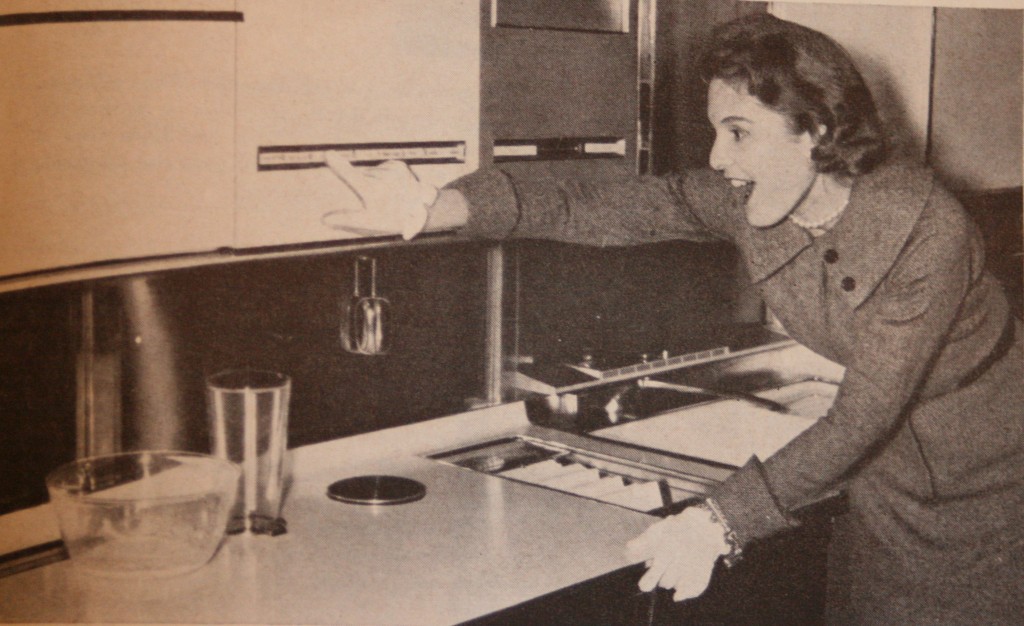 This picture goes with item #4, but I’m not quite sure which part of the caption this picture is illustrating.  All I can see is the rapture induced by the prospect of BUTTONS!  Push this one!  Push that one!  Oh, the joy of being a housewife of the future! 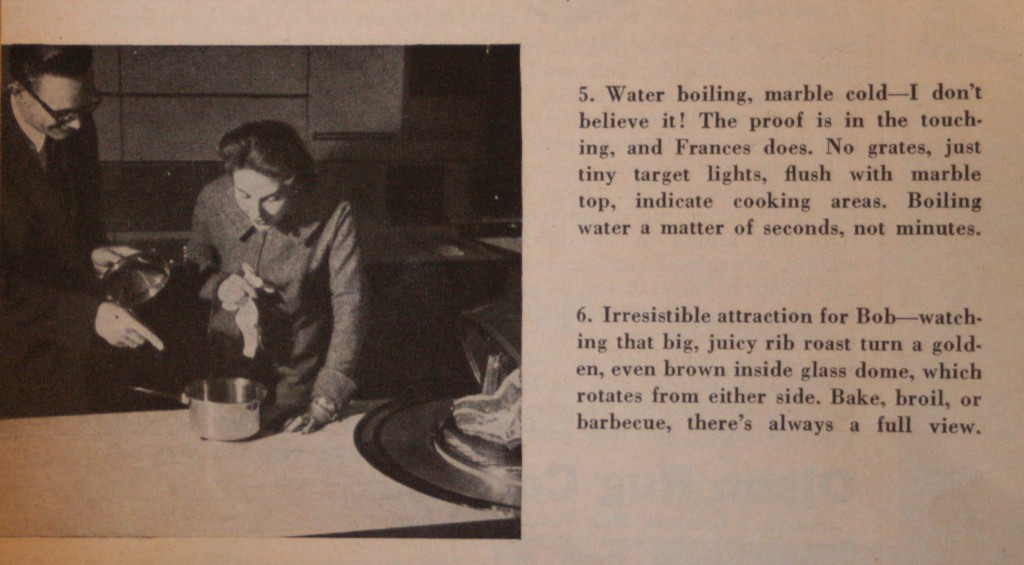 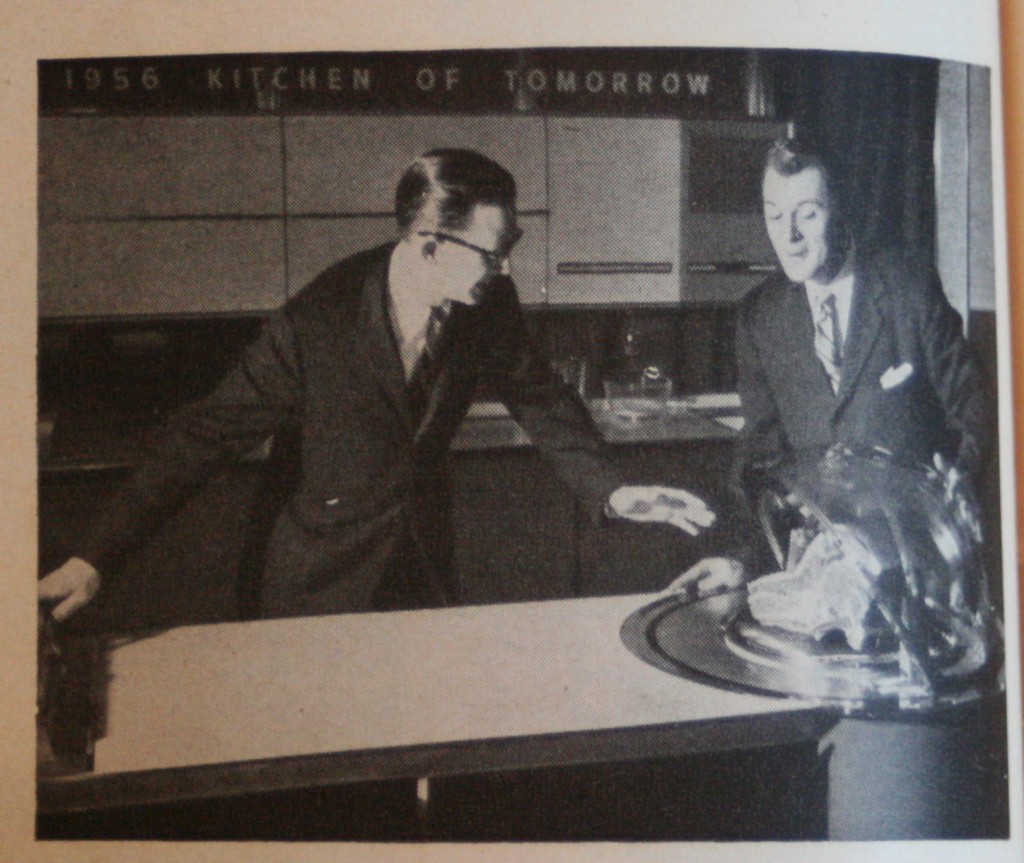 So while the wife is hyperventilating with happiness over the multitude of buttons she can push, the husband is stationed above the glass domed roaster, watching in drooling anticipation for the meal ahead.  There’s something creepy about this kitchen. Perhaps they should rename it as “The Kitchen of Tomorrow for the Voyeuristic and Tactile.”

Ha ha!  Those women are so predictable.  Give ’em a makeup drawer and they’ll love it every time.

The concept of a built-in makeup drawer hardly seems like a component of The Kitchen of Tomorrow, nor does it seem high tech.  Oh well.  They outdid themselves with their predictions on audio-visuals, though, because most of that is actually possible today.  Answering machine? Check!  Video phones?  Check!   Shopping without leaving your house?  Check!  Security systems?  Check!

Oddly enough, they want to eliminate button-pushing when it comes to calling people.  Just wave your hand!  I suppose no one thought about the difficulties this would pose when housewife Betty, trying to convey an important point to her husband during a heated discussion, accidentally initiated a call to her mother-in-law.  All by waving her arms! 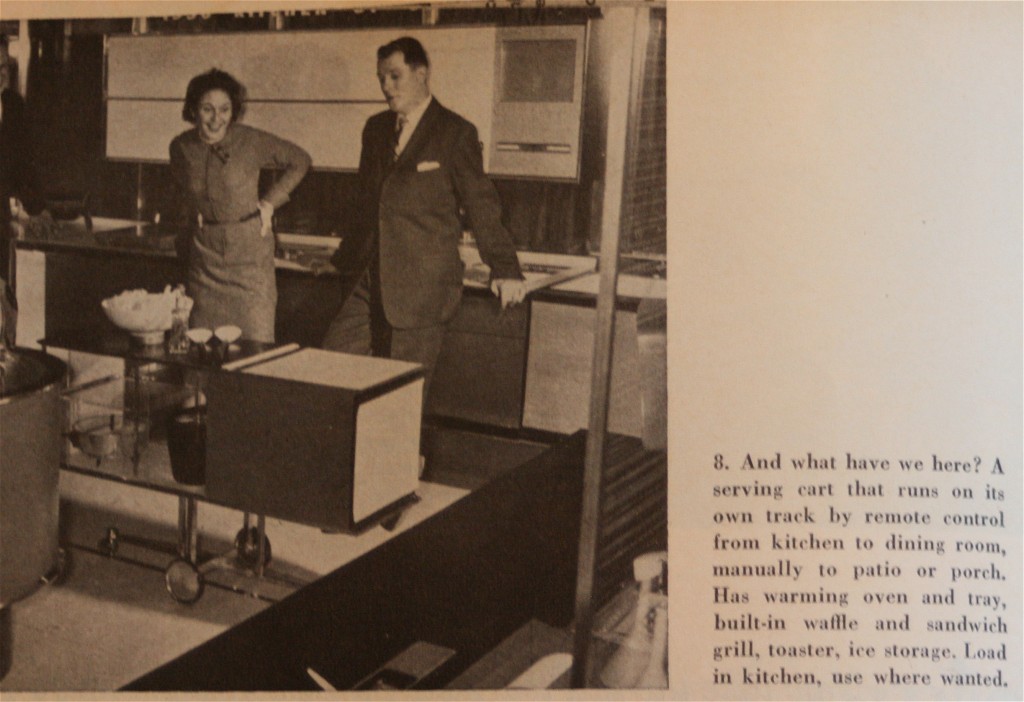 Well, now they DO have it made.  Your own serving trolly!  Load it up, send it to the living room, where the husband is planted (again) in front of the TV, and your communication-less marriage is complete.  Next up, how to cook food without moving an inch, followed by our segment on how to exist in a marriage without seeing or speaking to your spouse, ever!

Sure, Bob’s making a beeline for the button-ready alcohol because he is well aware that he’s going to have to put a second and third mortgage on the house once all this technology starts breaking.  I imagine this kitchen would look like Old Downtown of one of the major cities of America once the repairs were neglected: rusted track of serving carts gone bad, broken and missing buttons for functions no one can remember, pieces of linen sticking out of the broken linen tray (that got stuck on the third use, thank you very much), and the list goes on. 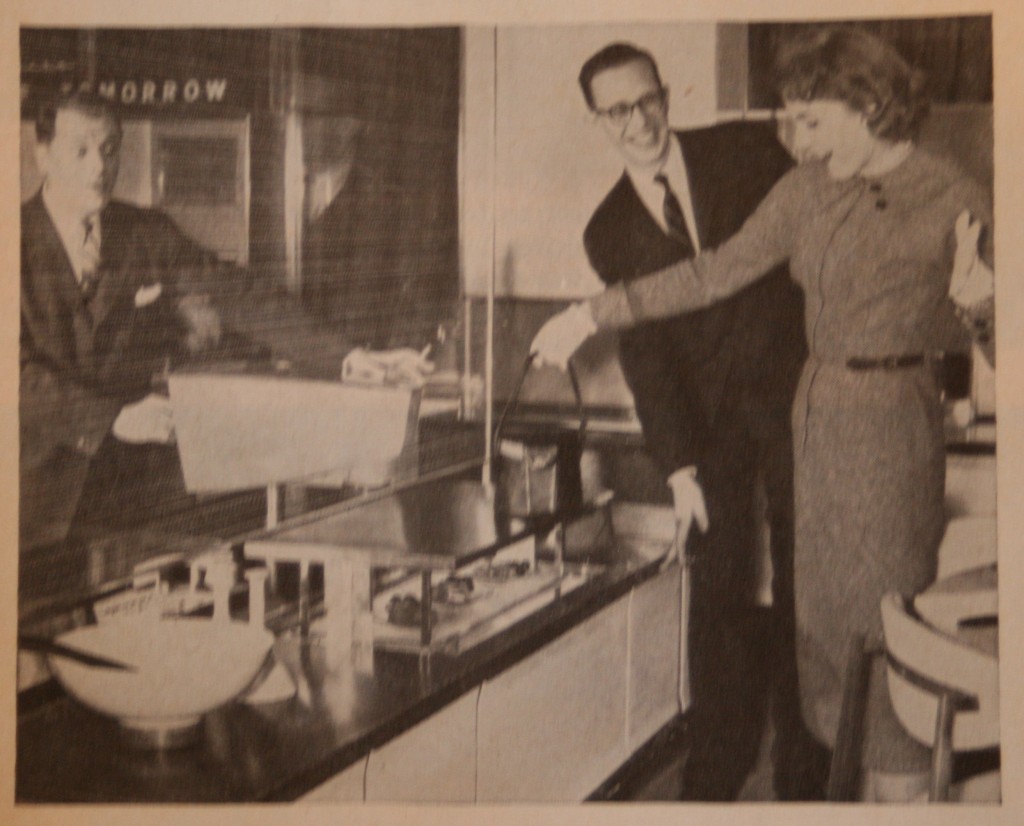 At this point, I’m just going to assume that the crisp salads and chilled desserts made themselves. 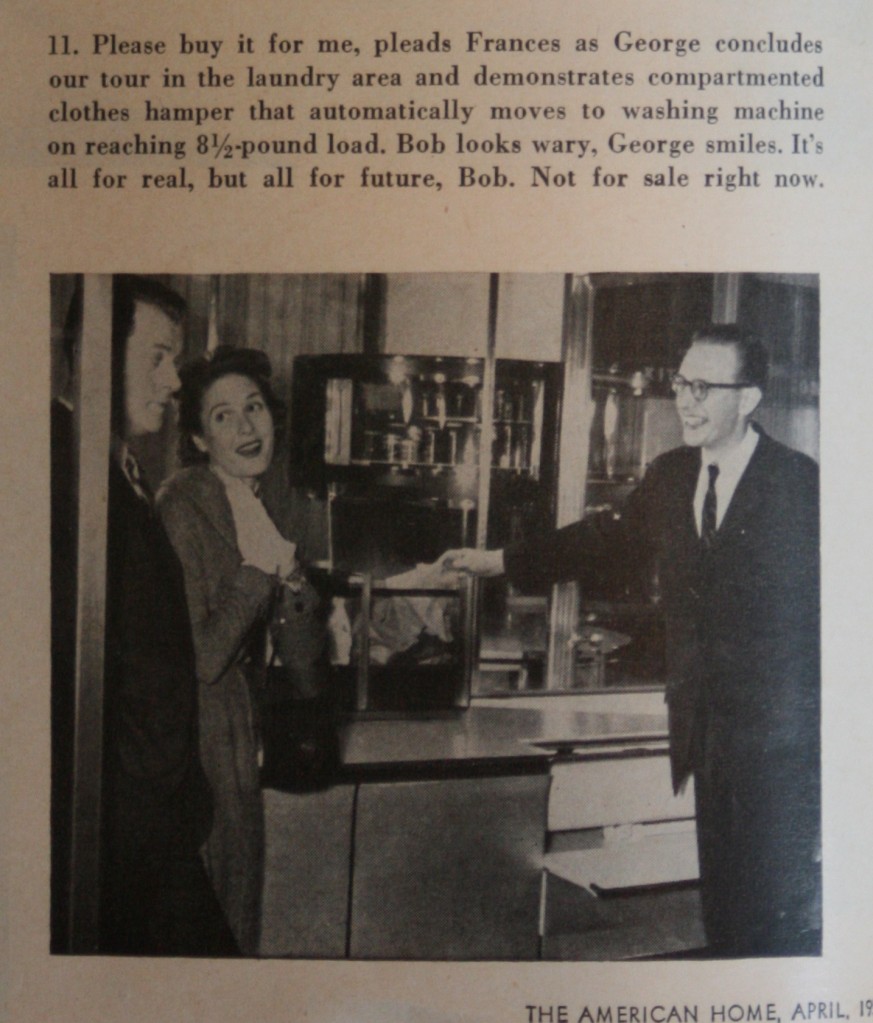 Well, not for sale ever, as it turns out.

Now, if you’ll excuse me, I have a doctor’s appointment to remove this callus off my “button pushing” finger.

6 Replies to “The kitchen of tomorrow”