I acquired a bound collection of American Home magazines from 1955. What a treasure trove of home decorating ideas! I’ll be posting some of those pictures in days to come. For now, however, I want to talk about food.

Ever notice that some of the food ideas presented in old magazines just seem plain disgusting? The pictures sometimes look like the aftermath of a messy operation, and the pairings sometimes make your stomach turn. No one will ever convince me that filling pear halves with mayonnaise is a good idea. No one!

I noticed a Campbell’s ad in one of the American Home editions, and a couple of their “creative” soup ideas caught my eye.  Please forgive my rather poor quality “pictures of pictures.”  The bound collection of magazines is so bulky that it’d take a special kind of amazon woman to scan the dang thing.  I like to think that I just don’t fit the bill. 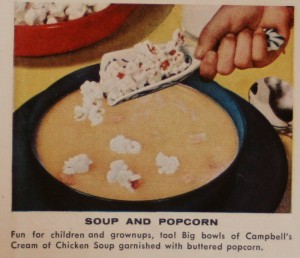 Seriously? Who in the world would want soggy popcorn in their cream of chicken soup? I can imagine a husband’s expression when his wife set a bowl of soup and popcorn in front of him. Time to load ol’ Betty into the car and get her to that head doctor.

Honestly, I don’t know which is worse: soup and popcorn, or this idea: 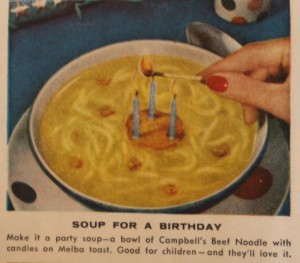 Thanks, mom. You gave me soup for my birthday. Soup from a CAN, no less. What did that take you — five minutes? Oh, sure, you think you can plop some candles on top and it will make it all festive. Betcha didn’t think about what would happen when the melba toast got soggy and the candles fell into the hot soup.

I can only imagine that poor child who received Birthday Soup. He recovered from the vast disappointment, eventually. He watched glumly while his friends’ moms baked birthday cakes at their parties and celebrated the traditional way. He tried to ignore the teasing that came from having a mother who served beef noodle freakin’ soup at his birthday party. Just as the gibes began to die down, however, his mother served this the next time he had a friend at the supper table: 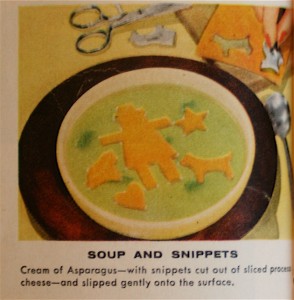 Oh, sure, she tried to dress up what would normally be a drab and rather tasteless meal: asparagus soup. The cheese cut-outs were cute — at first. As Billy watched the cheese slowly melt on the surface of the soup, he began to wonder if there weren’t a voodoo quality to it all. That person looked strangely like . . . dad. And there was his dog, and his cat, and a heart. Wait — whose heart? His? Dad’s? Was it a gentle way of reminding him that Mom loved him, or was it a voodoo wish that Dad would drop dead of a heart attack?

As Billy looked up in confused panic at his mother’s face, he couldn’t help but notice the weird, dreamy smile on her face as she slowly stirred her cocktail and watched the cheese melt into the soup.

As we continue, I can’t help but wonder if these soup ideas weren’t all meant for the same sort of psycho mom. There had to be someone out there who thought these ideas just sounded scrumptious, and so inexpensive to make, too! Won’t the hubby and the kids be so surprised when I set this down in front of them? 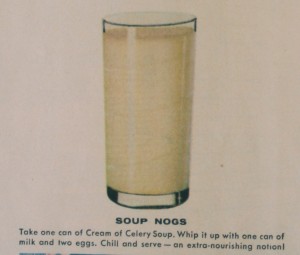 They’ll be surprised all right, but not for the reasons you may think, lady. Soup, and raw eggs . . . in a glass! Mmmmm, yummy!  Just think about how much fun that would be to clean up from the carpet after the entire family vomits it up from salmonella poisoning.

When the soup nog idea runs thin, there’s still another way to horrify the family. Soup on the rocks! 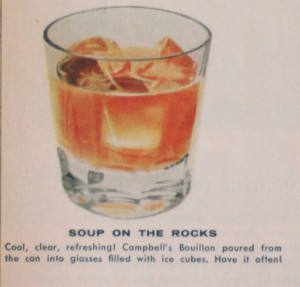 Husband have a drinking problem? Getting tired of watching him swill scotch while sitting in front of the TV all night? Just replace it with boullion. Serve over ice! He’ll never know the difference. Note their encouragement to “have it often.” After serving this more than once, your family will hate you for good. If that’s your goal, then you will have succeeded.