After the flooring was installed, I started staring at the room, trying to envision what everything would look like when this project was completely done.  The table would be toward the front of the room in the space where the was formerly was.  The back of the room, originally, was supposed to be where our computer would go, since we lack a better place for it other than the basement.  While the basement might be an OK spot for it, it is also the kids’ playroom, and we were a little worried about the damage those kids could inflict with flying toys, etc.

Once the flooring was in, however, both of us thought better of putting the computer desk in our new room.  It just didn’t look right; I felt the room needed something else to create a cozy atmosphere and bring everything together.

Sporadic furnishing idea: put a gel-fuel fireplace (the portable kind) along the far wall, facing the kitchen.  I have been skeptical about these things for a couple years, even as I pored over favorable reviews of various models, longing so much for a fireplace in my house.  Every winter I kick myself that I didn’t make sure a prospective house had a fireplace before we bought it.  Every time it snows, I kick myself harder.  You see, I grew up in a log house that had a fireplace and a wood-burning stove, and when it snowed, those fires brought just the right ambiance to the room.  Now, in my own house, I want that ambiance.

I started looking around for stores via Ebates that offered the gel-fuel fireplaces.  They usually run around $400 or so, but because I’m a relentless deal-seeker, I wanted to find the best possible price out there while still getting a fireplace that looked right in our new room.  I found one at the Home Decorators Collection Outlet, and promptly ordered it (it was the right look, and $200 — about half of what these babies usually cost).  My glee was short lived, however, when I received an email a few hours later, informing me that the fireplace was no longer available and gee, were they sorry.  Not as sorry as I was, I thought, and went back on the prowl.

The ultimate decision came down to a selection from Sam’s Club and one from QVC.  Both offered similar fireplaces and similar prices, but the QVC fireplace came with a screen kit, which ran about $50+ if purchased separately, while the Sam’s Club fireplace did not.  Decision made!

I’m hoping my opinion of this fireplace meshes with the reviews currently on QVC.  We shall see!  Here’s the model I finally chose: 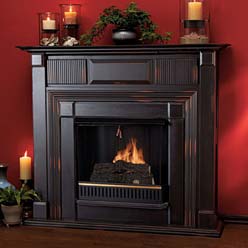