The walls came down today … and I suppose while there are dozens of ways to mean that statement metaphorically, I actually meant them in the literal sense.  The wall that separated the kitchen from the “computer room” — formally my youngest son’s baby room — has been bashed in: 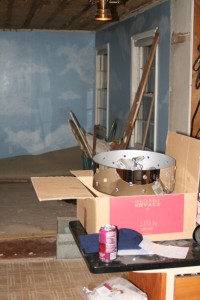 We also had the 12×12 ceiling squares removed because a) they were ugly and b) they were ugly.  We had a ceiling leak a few years back and it’s virtually impossible to repair those things and replicate the same white shade.  Plus, now that this room is joined to the kitchen, we wanted to match that room’s ceiling to the smooth one in the kitchen.

I did find a minor treasure in the space where the wall was taken out: a 1952 wheat penny.  Since the house was listed as being built in 1953, I can only think that the penny was dropped by the original builder.  It’s a small find, but I’ll take it.

I had a big decision to make about flooring, though.  Right now the kitchen has the original hardwood at the bottom, then a subfloor topped with UGLY mustard-yellow-and-green linoleum, then another subfloor topped with the lovely vinyl you can see in the picture.  The “cloud room” had blue carpet layered over the original hardwood floor.  This proposed a problem: if I wanted the same floor to extend from the kitchen into the living room, I’d have to sacrifice the hardwood floor in the “cloud room,” since they’d need to put a subfloor overtop it to make it level with the kitchen floor.  Because I had planned to have the kitchen table in the space where the wall once was, this was a big problem.

After agonizing for a couple of hours (I really wanted to save the hardwood!), I decided to go for a uniform look rather than rearranging everything around the hardwood.  After all, if I saved the hardwood, I’d have to have a floor transition in the middle of the floor underneath my cracked ice chrome table, and that would just look too strange for me.  Thus, the hardwood is being sacrificed for a level floor.  I’m sorry, hardwood.  I tried … I really did.

And here amidst the chaos and dust sits the George Kovacs light that sits on the countertop, waiting to adorn my chrome table.  Can you tell I like chrome? Can’t wait to see what this baby looks like all hung up. 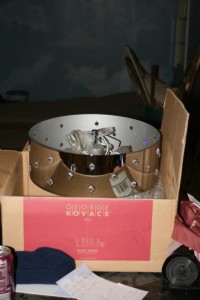 One Reply to “Finally, this blog can talk about RENOVATION … for real”