Yes, I know it’s been a while.  It took me a couple minutes to remember how to log back into WordPress.  THAT is how long it’s been.  I had to enter my password three times before I got it right.  Wordpress seemed to give me the stink eye when I successfully logged in, as if to say, “Oh, and NOW you want to see what’s been happening after all this time?”

In reality, no one really cares what I’ve been up to, so let me get to the point of this post.   I’ve been on a cleaning spree lately – mucking out the closets, sorting through clothes, and cleaning up all the forgotten places of my 50’s house. I brought a huge load of clothing and household stuff to Goodwill, and that felt pretty awesome to be able to get rid of that much stuff with a single trip.  Yesterday was my basement day, and as I was cleaning up my “box corner,” which is the place I put all the boxes I get from online shopping and whatever else – y’know, just in case I need them <cough cough> – I uncovered a couple of non-empty boxes that I had forgotten about.

As I viewed the scrawled handwriting on the side of the box, the day I acquired this treasure came back to me in a flash.  I was looking around at a Salvation Army for Midcentury goodies, and I saw these two boxes (containing china service for 14!!) shoved along the wall.  I glanced at the pattern and fell in love; it was perfect 50’s simplicity, and the dishes were in remarkable shape.  The price for the set was $40, which I hemmed and hawed about initially, but then I remembered: this is service for fourteen.  I think somewhere in the back of my mind, I probably drudged up a feel-good mantra about how life is too short and to do what makes you happy.  I bought the dishes.

When I got home, I did a little research about the pattern I acquired.  The china was stamped with “Taylor Smith Taylor.”  Turns out that I bought myself a pattern that probably was from the 50’s (made 1953-1960)- a pattern called “Blue Lace.”

Given that the metallic edges are in great shape, I have a feeling that this china was only used for special occasions.  I’d go as far to say “or not at all,” but a few imperfections on some of the pieces suggest otherwise.  One teacup is missing a handle, but the packers of the box included it anyway, still carefully wrapped with a 2012 issue of the Los Angeles Times along with Christmas-printed paper towels.

I love the simplicity of this pattern – the blue flowers on white, the silver edging. 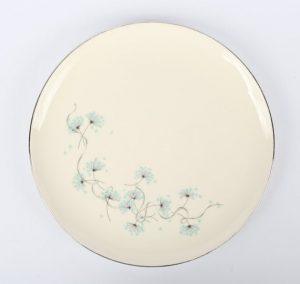 I wonder if the person who donated this china to the Salvation Army even knew its worth, since the box had “Lavon’s aqua dishes” scribbled on the side.  My overactive imagination can only wonder how Lavon acquired these dishes.  How many meals did she used them for?  What memories were made around the table as meals were served on these plates?  Why didn’t anyone else want Lavon’s china?

I spent a half hour taking each piece from the set and washing it in soapy water, apologizing for the neglect I had shown these dishes since I brought them into my home.  The boxes which contained them were mildewy and soggy from wet basement issues and nearly tore apart when I lifted them up.

Obviously, I had not been a good steward of what was probably one of Lavon’s treasured possessions.

The dishes are now clean and in storage in my kitchen, and I will make a point to use them as often as I can.  The thought which drove me to purchase them originally keeps popping into my mind as I washed these babies up: Life is short.

In light of my “rediscovery” of these gems, I would add a bit more to that mantra:  Life is short; use the good china.