Yes, this is another dog-related post, because as I wrote about last time, I happened to acquire a dog that has become a respected member of the family.  He wags his tail when he sees me.  The boys play with him outside and have a ball.  I’ve started to learn his little quirks and have become aware of just how “interesting” owning a Jack Russell can be.

I don’t know what pedigree my dog has, but he definitely has the Jack Russell markings.  Since I know exactly zero facts about Jack Russells in particular, I decided to download a “Dummies” book on my Nook in order to get some background on them.

I might mention that before I downloaded this book, Nick had already taken the liberty of chewing my vacuum cord to shreds, thereby saving me from having to make up excuses to not vacuum.  Thanks, Nick!

So my dog was a chewer — this I found out.  I also realized that my dog was VERY high energy.  If I didn’t take him for a walk in the morning, at lunch, and after school, he would go NUTS with energy …. nuts as in jumping up and ricocheting off my legs as he did the craziest dog dance I’d ever seen in prelude to a walk.   He couldn’t wait to walk.  If he saw me with the leash in my hand, he’d start whining, singing, and barking as he tried to control his excitement.

After he chewed up his walking harness, I knew that I had taken on a handful of dog.  I learned rather quickly not to leave things in the room where he slept.  When I started reading up on Jack Russells, I also became a bit alarmed by the warnings that first-time dog owners should NOT own a Jack Russell terrier, because they are a handful and a half.

After reading the book, however, I concluded that either I have an unusually calm Jack Russell or that he is a mix of some other placid dog breed, because although Nick has his moments, he doesn’t freak out nearly as much as the dog book said that they do.  He is a smart dog, however.  He has his naughty moments, but he also has many other ones where he has figured out “the rules” in a relatively short amount of time. 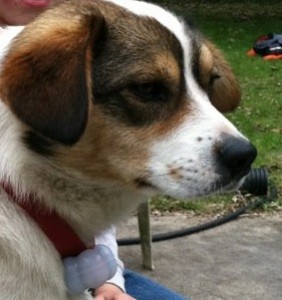