Although I’ve always been an animal lover, I have never really wanted to have a dog, mainly because I saw some of the dog hassles that friends and family had to deal with: house training, poop scooping, bad habit obliteration, kenneling, yard fencing, etc.

About three weeks ago, I suddenly began to have an urge for a dog.  I have no idea where this desire came from, but I think it stemmed from a desire for my boys to have a “best friend” to grow up with.  My youngest is very much an animal lover, and I enjoyed watching him interact with other people’s dogs.  I wanted my sons to have a dog to call their own, and that’s where the wishing began, I believe.

A week ago my sons were out in the yard playing in this very uncharacteristically warm March weather when my youngest came racing inside.  “There’s a strange dog in the yard!” he yelled, and I, sensing that there was a rabid dog about to devour my children, darted outside as fast as I could.

There he was — a little white friendly dog, wagging his tail and looking as harmless as could be.  I melted instantly, of course.  I pet him for awhile and realized that he seemed rather tame for a stray done.  Looked clean, too.  I put him in the garage with a bowl of water and some cat food (which he loved!) while my sons and I went to school conferences that night.  I didn’t have a lot of time to think about what to do with “doggie,” but a thought was starting to form as I listened to my boys talk excitedly about the pooch.  Was it a coincidence that I had been thinking about getting a dog for  a few weeks and then suddenly there appears one in my yard?

I was well aware that there was a chance this dog belonged to someone.  That night I looked at a the local animal rescue site and noticed this dog’s picture, but still wasn’t totally sure that the pic was the dog in my garage.  By the next day, however, I was convinced that the two dogs were one in the same and I called the number of the person who was fostering the dog.

Needless to say, the dog did belong to this person.  However, the lady on the other end was more than surprised that I was not only calling to see if she could come pick up the dog that I’d found; I actually wanted to adopt it.  I think I detected a little relief in her voice as well.  The dog was mine.

Once I relayed the news to my boys, they were ecstatic.  I instructed them to agree on a name and within a minute (after my youngest suggested such gems as “poochie” and “cutie”), one of them suggested “Nick” and the other one agreed.  Nick the dog.  It fit.

Want to meet him?  Here he is after his first bath, which he stood perfectly still for until the end! 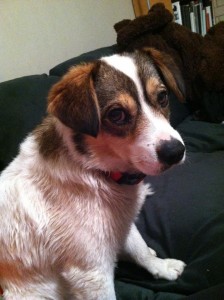