As I described in my last post, I recently purchased a 1941 (or thereabouts) radio and phonograph.  The cord’s been cut off (probably from safety concerns) but it is in terrific shape overall.  I know boo about radios or their repair, but I am hoping that once the cord is replaced, the radio will work.  Think it’ll be that easy?  Stay tuned.

There’s something about the old wooden radios that gives me a nostalgic rush of emotion, which is interesting considering that when I was growing up, wooden radios had long been replaced by plastic and my teen years in the 80’s gave us radios that were lovely pastel colors.  My father did, however, own some of those old wooden radios, and I used to get a thrill out of hearing the decisive click of the knob as the radio glowed and hummed to life. Even the static was endearing, and I used to marvel at the fact of how many years of history had been narrated through those speakers.

That is certainly what I was thinking when I bought the 1941 Airline.  Think of the World War II news that was delivered to whoever owned the radio before; think of the music styles of the 1940s that would change drastically in a decade and continue to morph constantly after that.  Think of all the family gatherings that occurred where this radio was a quiet bystander, maybe getting used for background noise, or maybe just sitting on a table, looking fantastic.   The radio I bought has a history with it and still looks great in 2012.  There’s something to be said for owning a piece of history, even if some of that history will never be known by me. 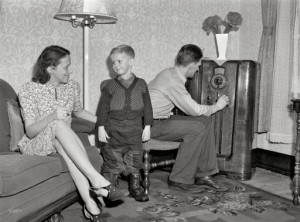 I saw this picture on Shorpy.com the other day, and I will once again put in a plug for this fantastic website. If you like photographs and you like history, you will surely get lost in that site for hours.

Anyway, now that I’ve described my love for old radios, I’m sure you can figure out why this picture appeals to me.  That radio is beeeee-autiful!  It appears to be just a laid-back family night in this photo, with the radio providing the sole entertainment … unless little Billy there is going to break out into song and dance while his proud mother continues to beam at him.

Mom, Dad, son, and a crackly stream of voices and music from their monstrous radio that was both functional and stylish.  No video games.  No TV blaring out commercials and general junk.  No cell phones buzzing and beeping and turning everyone’s eyes from each other to the plastic gadgets in our hands.   Sometimes, the past can remind us that progress isn’t always progress.

I will admit that this photograph inspired me to rebel against the technology that seems to be zapping more and more time away from parents and children.  I try to make a point to spend quality time with my kids, but I also feel like I’m losing the battle to video games, TV, and whatever other toys battle for their attention.  So I went out and bought Monopoly, realizing that I was raising two boys who had no clue how to play this classic game.

And now?  I’m thoroughly sick of playing Monopoly … because that’s what we did ALL WEEKEND LONG.  The kids took to the game right away and now they can’t get enough.  My oldest has become a mini Donald Trump, priding himself on amassing fortune AND property … and kicking my butt in this game.  Meanwhile, I couldn’t be prouder of my little Trump, and I am loving the time away from the electronics and just being together at the table.

The old radio’s there too, and I’m sure it approves.