One year and two months (to the day!).  That is how long of a break I have taken from blogging, and now I’m ready to get back in the game.

Without going into too much detail, let’s just say that the hiatus was needed.  Life took a sudden, rather violent turn and I’ve been hanging onto the steering wheel with white knuckles ever since, trying desperately to stay on all four wheels.

However, some things have not changed.  I still love all things retro and fifties, and I’ve accumulated some great pieces during the past year to add to my collection.  Money’s been tight in the past year, so I have not had the luxury of going to the antique shops as much as I like to, but the things I have gotten have been low-priced items that were just too good to pass up, including a pair of brand new, starburst-adorned cooking pans that still have the stickers on them.  The price?  Twenty bucks, thanks to a tagless item in an antique store run by a guy who didn’t own the item and thus didn’t care what he sold it for.

What — pictures?  You want a picture of such a rare and beautiful item?  Ok, twist my arm …. 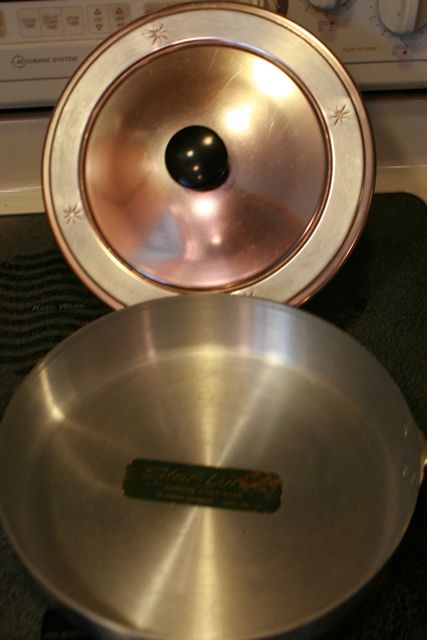 I was actually going to use these until I saw the tag inside this pan, and then there was no question that these would not only go unused, but they would be prominently displayed in my house where starburst lovers like myself can get a small thrill out of seeing this pan every day.

Of course, there are no other starburst lovers in my house at this time, so I am the only one who gets to enjoy it.  But I am NOT complaining.  This was a cool find.  End of story.

Here’s a closeup of the starburst pattern on the lid: 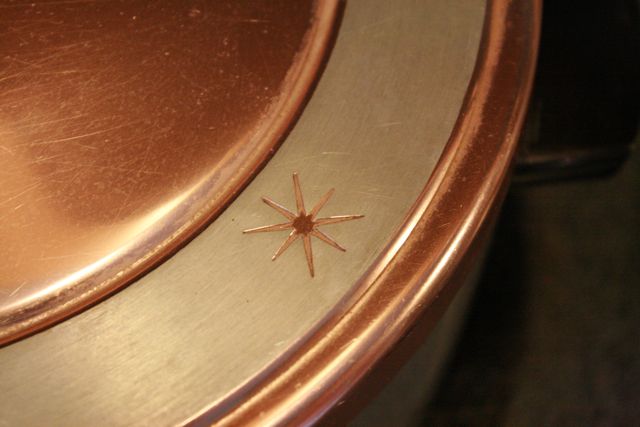 Now, here’s the mystery surrounding these pans: I cannot find a single piece out there in the big ol’ world of Google to match these.  Nada.  Zip.  I’ve found an ad for this cookware via Google in an old newspaper from 1959, but apparently no one bought any and the entire line has disappeared.  Ebay shows nuttin’ …. Etsy shows nuttin’ …. and I am stuck with two very lonely pieces of cookware that would like some friends.  Star Lume cookware has  vanished into the cigarette smoke-hazed air of 1959, and I cannot find out what happened to it.

The search goes on.

One Reply to “A long hiatus”