Perhaps my title is misleading, because it reflects the intent of this post, not exactly the result. I woke up this morning intending to research the history of the chrome table trend . . . only to find that such research was the equivalent of trying to handstand in a tub of Jell-O. It was a FAIL moment.

I don’t suppose the history matters much, for it’s painfully obvious that the tables reflected a clear trend in how decorating was evolving in Midcentury homes. Although the “early American” feel could still be detected in decorating ideas from the time, Midcentury decorating was really about color. Families were beginning to recover from the post-war period, and the future gleamed before them. People needed something new and different to represent the changing world, and this is where color came in. Take this ad for example: 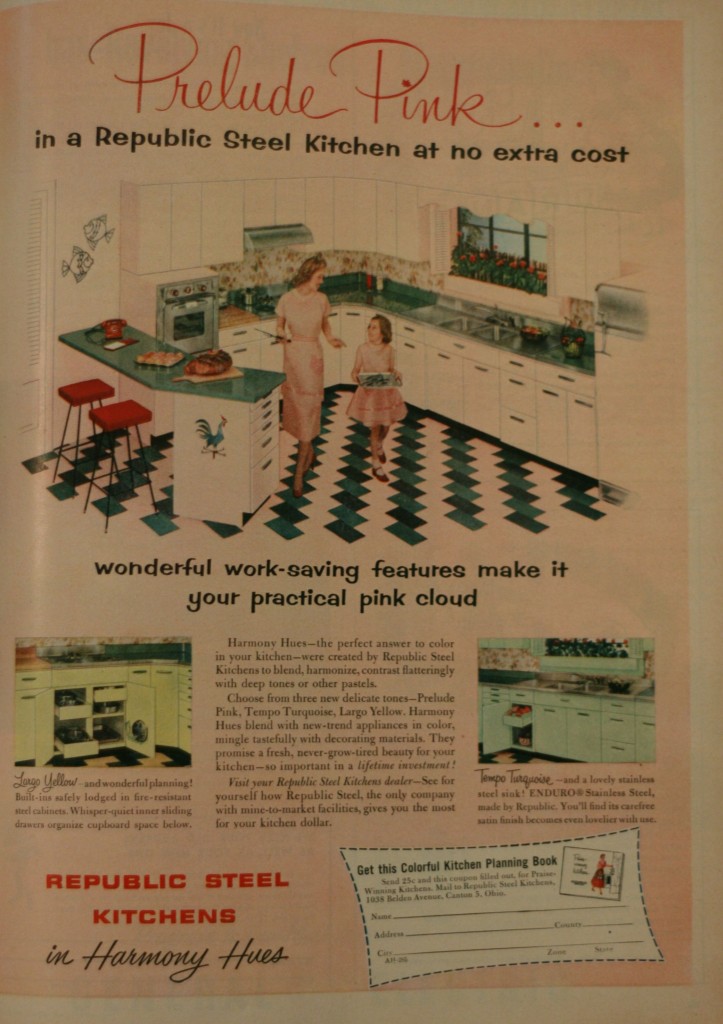 How heavenly would it be to have a Republic Steel kitchen in pink?  The cabinets, walls, and floors were all color coordinated: pink, blue or yellow.  The Midcentury home reflected the fact that people had a plethora of choices when it came to home decorating.  Before that point, if a family would go to a furniture store to pick out a kitchen table, they’d have a choice of dark wood, light wood, or painted wood.   People needed something new and different, and the solution was color. 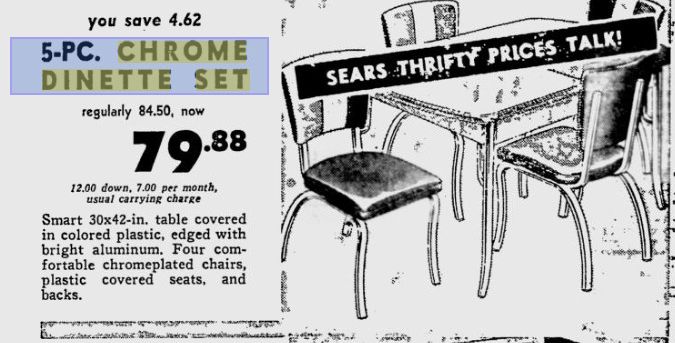 You save $4.62!  This table lacks some of the glam of later models, but here was the pitch:  an economical table that utilized modern materials in color.  Remember Mr. Mcguire’s advice to Ben in The Graduate?  Plastics.   He wasn’t wrong.

The sales of chrome tables seemed to explode in the early 50’s, for no magazine geared toward the female population went without a handful of ads from various chrome dinette sets from makers such as Daystrom, Chromcraft, or Arvin.  This wasn’t your grandmother’s table, and that’s exactly what the Midcentury buyer enjoyed about them.  Here is a sampling of some other ads from a smattering of 1950 Better Homes & Gardens magazines: 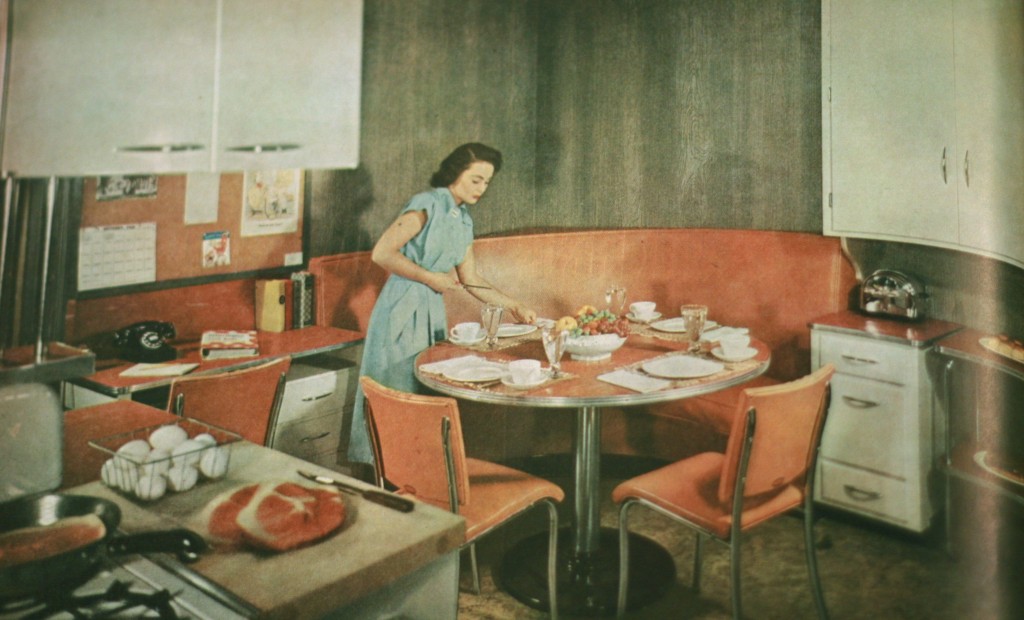 See?  Even the meat on the counter seems to match. 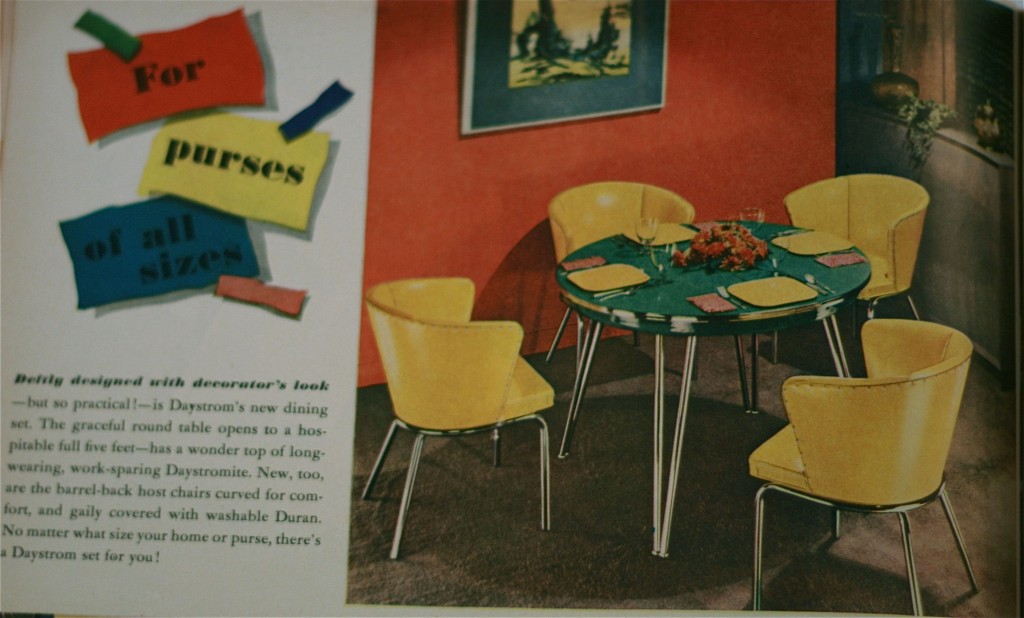 I apologize, for I did not scan these pictures, mainly because I was intending to show the pictures of the chrome tables, not highlight the text.  So don’t knock yourself out trying to read it.  My scanner is not very user-friendly when it comes to scanning large, bulky bound magazine collections, so I had to relegate myself to taking photos of the ads.

Anyway, it seems astounding to me that the little round table pictured above would open up to a full five-feet long, as the ad claims.  That is one heck of a leaf.  Like the previous ad, this one again touts the economical factor of purchasing a chrome table.  There’s one for every purse!

From the same ad: 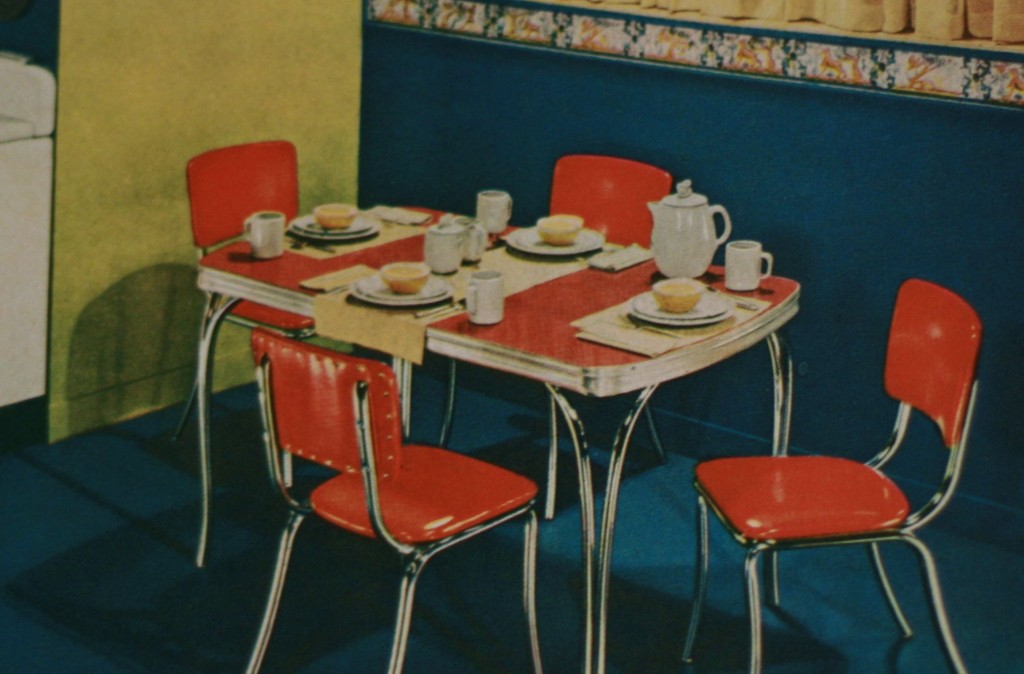 My favorite part of the ad appears at the bottom, where the Daystrom people tout the wonders of the material that covers their tables, “Daystromite.”  Love the picture of the yellow table.  You can leave your cigarette on it and not worry! 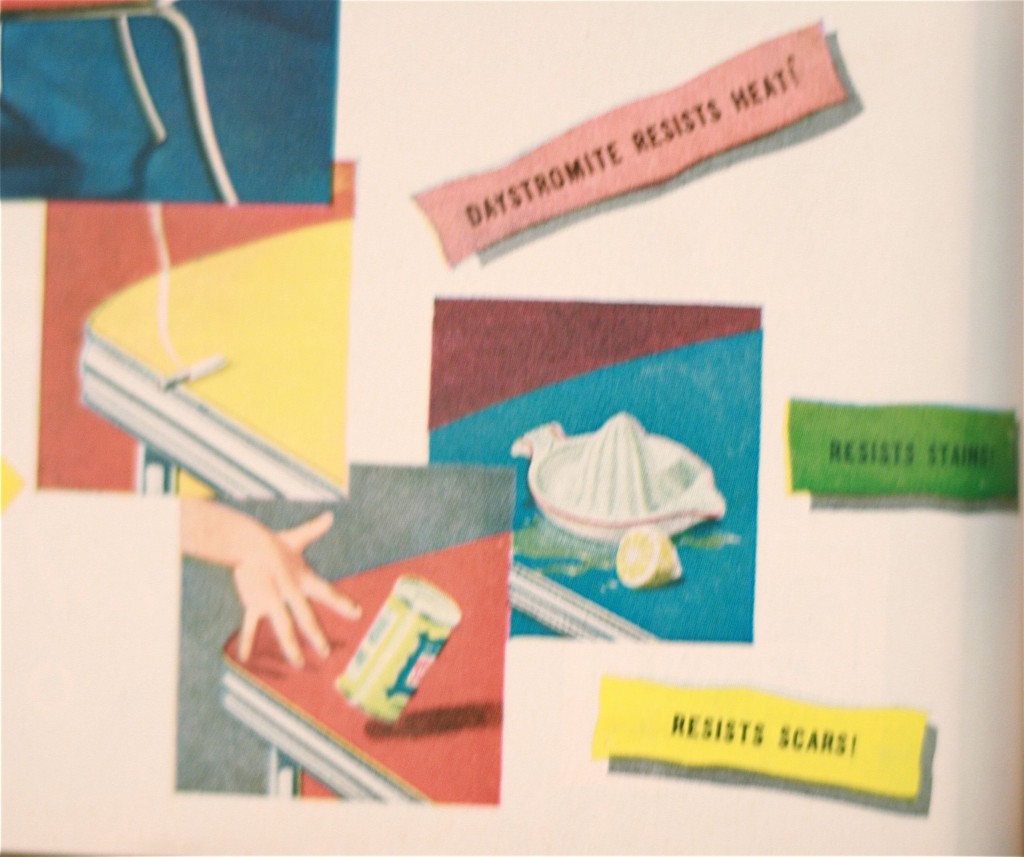 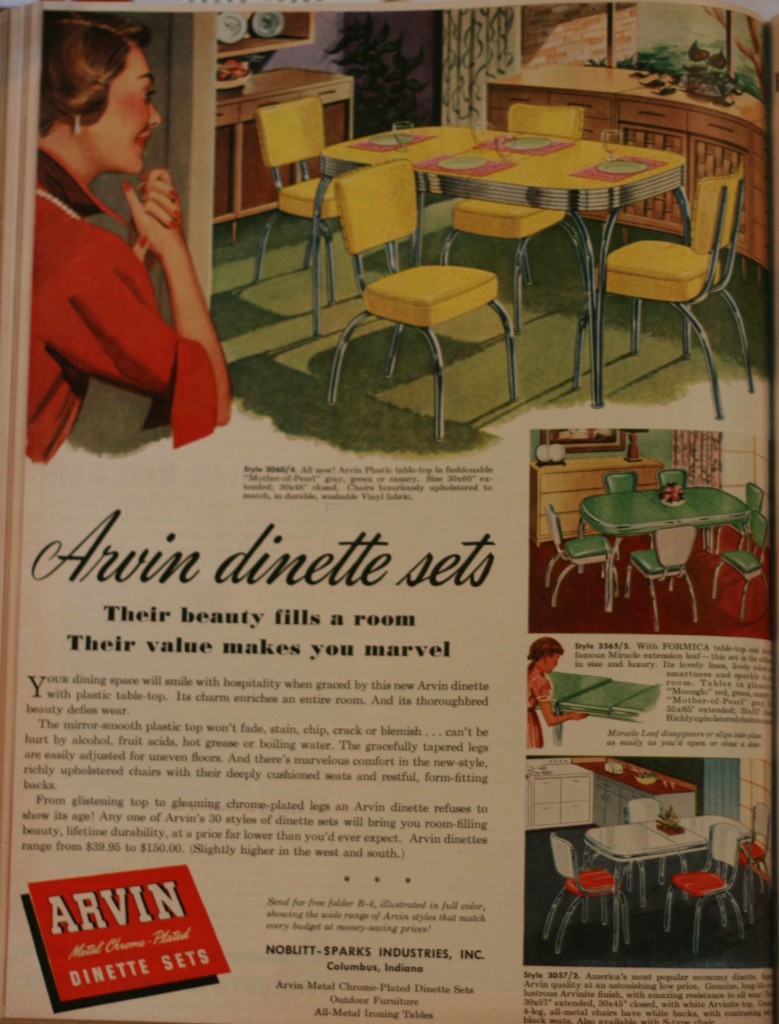 Color, color, color!  Tables and chairs could be mixed and matched. 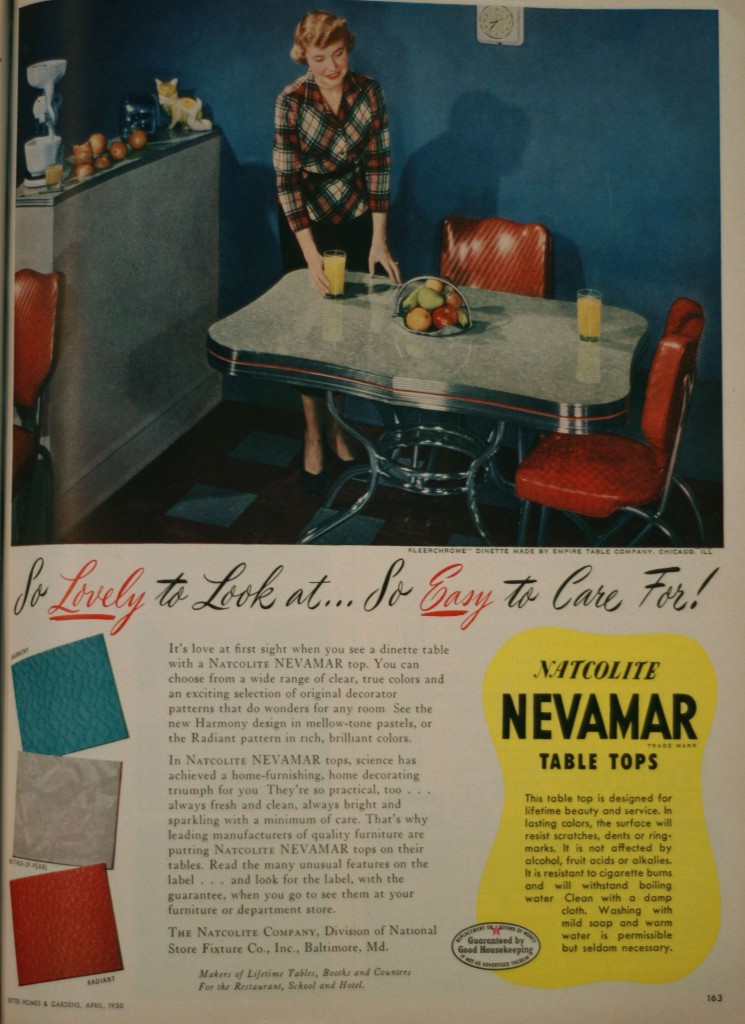 Love the creative name here:  Nevamar!  Go ahead — be rough with the table . . . it will Nevemar!  Here we see some creativity with the table’s edging.  Color piping that matched the chairs and provided a contract to the top made everything come together.  Bonus with this table: a base that doubles as a foot rest!  I wonder, however, how many people stubbed toes on the table feet.  Ouch.

Yes, I know it’s blurry.  Hate me if you will, but I selected this ad to show the selection of “Nevamar” table tops that were offered in 1950.  The yellow ripple effect was called “Harmony,” the gray narrow stripes dubbed “Silver Oak,” and the red was called “Mother of Pearl.”

I like the simplicity of red, yellow, or gray “cracked ice” better, but that’s just personal preference.  They’ll catch on, eventually. 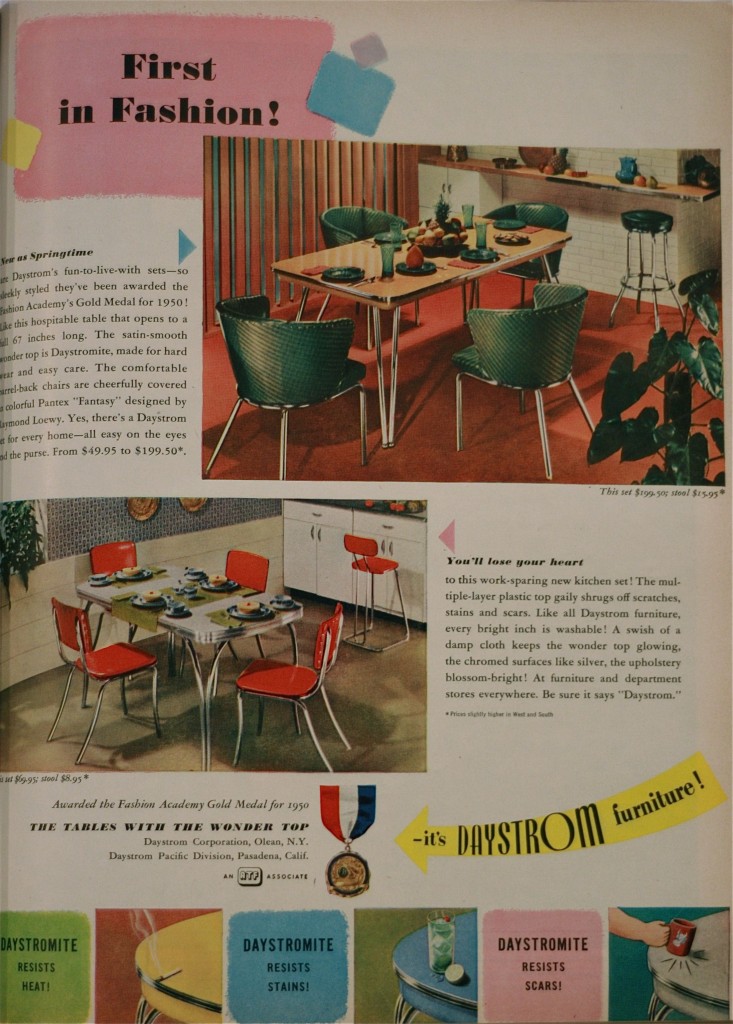 There’s the cigarette advantage again.  Another Daystrom ad, obviously, and similar to the other one, but now, rather than touting the economical advantages of the chrome dinette sets, they go right for the minds of the trend-conscious: these tables are the first in fashion! 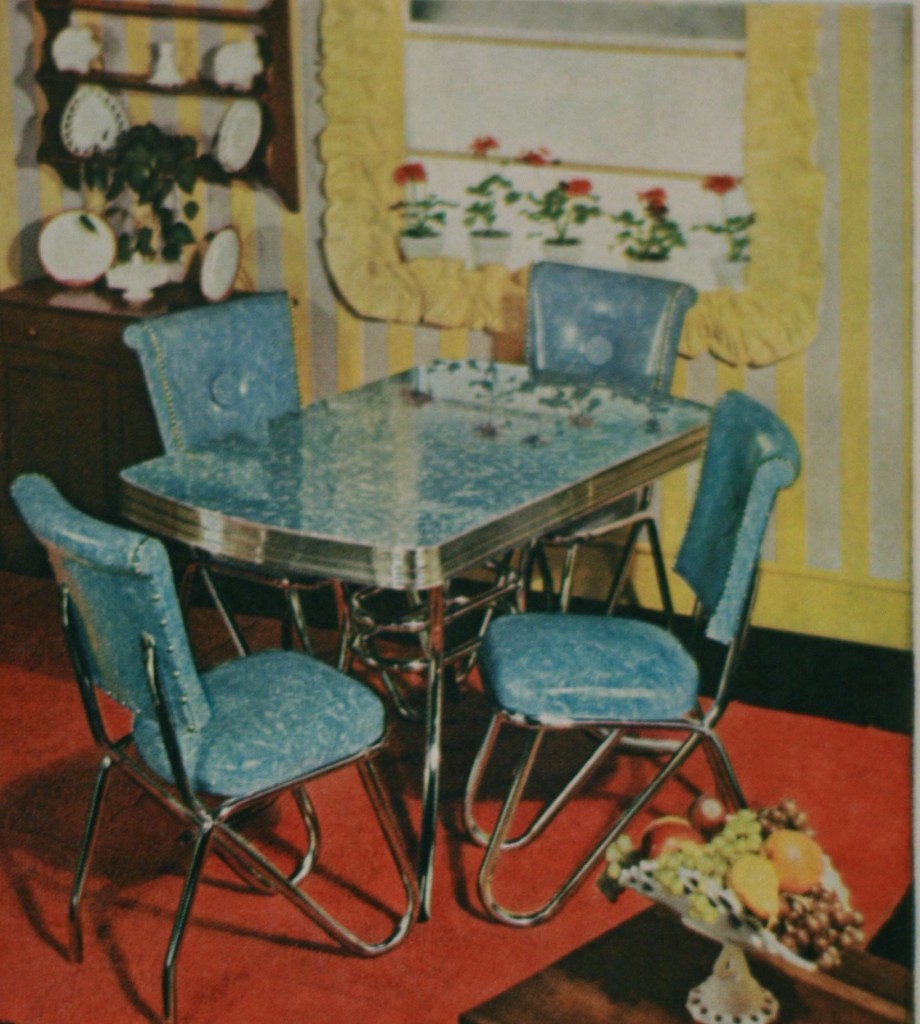 If red, gray, yellow, or green weren’t your style, you could go for a cheery baby blue.  Kind of looks like blue cracked ice, which I’ve never seen before. 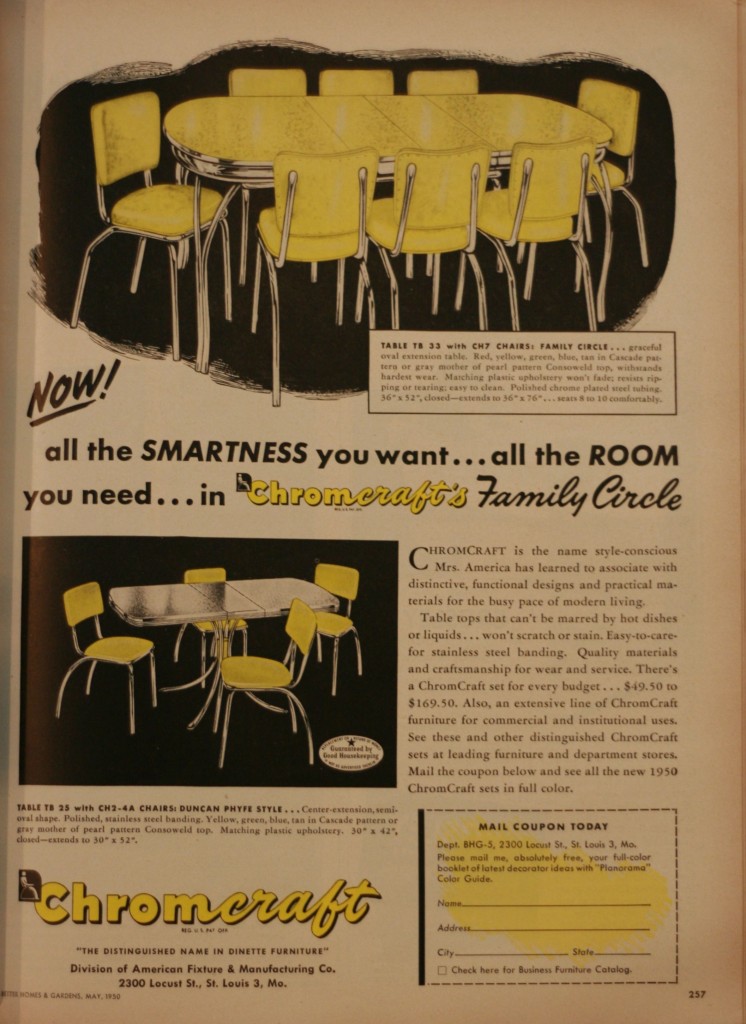 You could really pack ’em in around these chrome tables: another advantage, obviously.  The “Family Circle” table had some extensions that would allow the table to comfortably (maybe?) seat eight people. However, I’d recommend avoiding serving steak at the Family Circle table.  Elbows everywhere, and not enough room for ’em all.

Oh, the “glamor” top!  Plastic has never felt so beautiful . . . or economical (the common theme).  It cleans up nicely with just a “flick of a cloth” too. 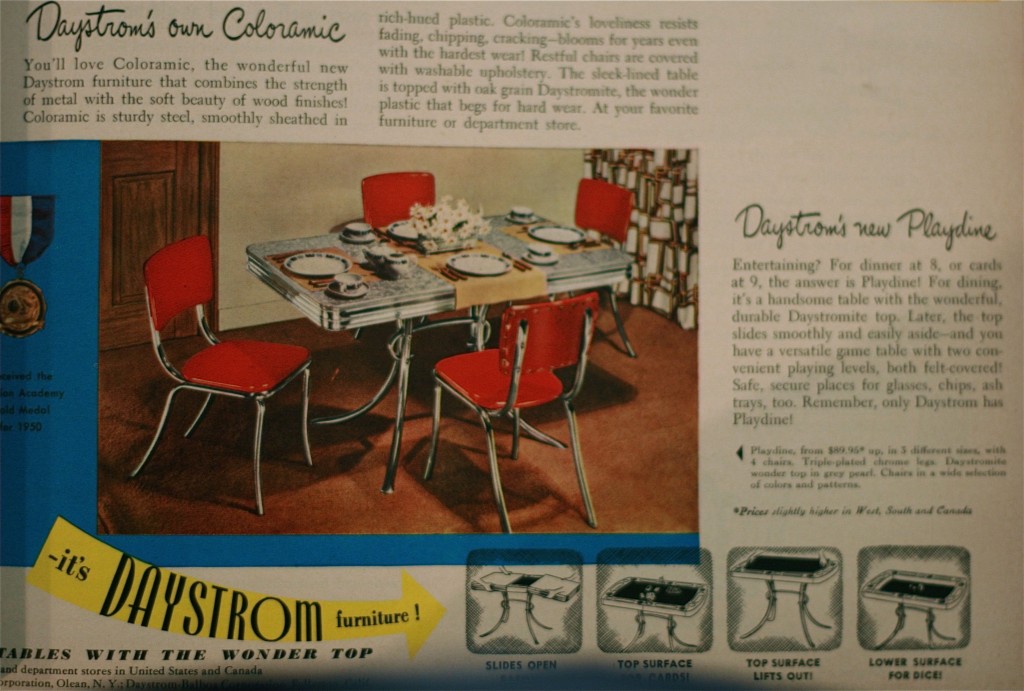 Just when you thought chrome tables couldn’t get any more innovative, Daystrom comes out with “Playdine,” which was a kitchen table AND a gaming table — covered in felt, no less.  Creative, definitely, but you know that most wives weren’t going to purchase a table that just encouraged their husbands to have poker night in the dining room every Friday night.   No way. 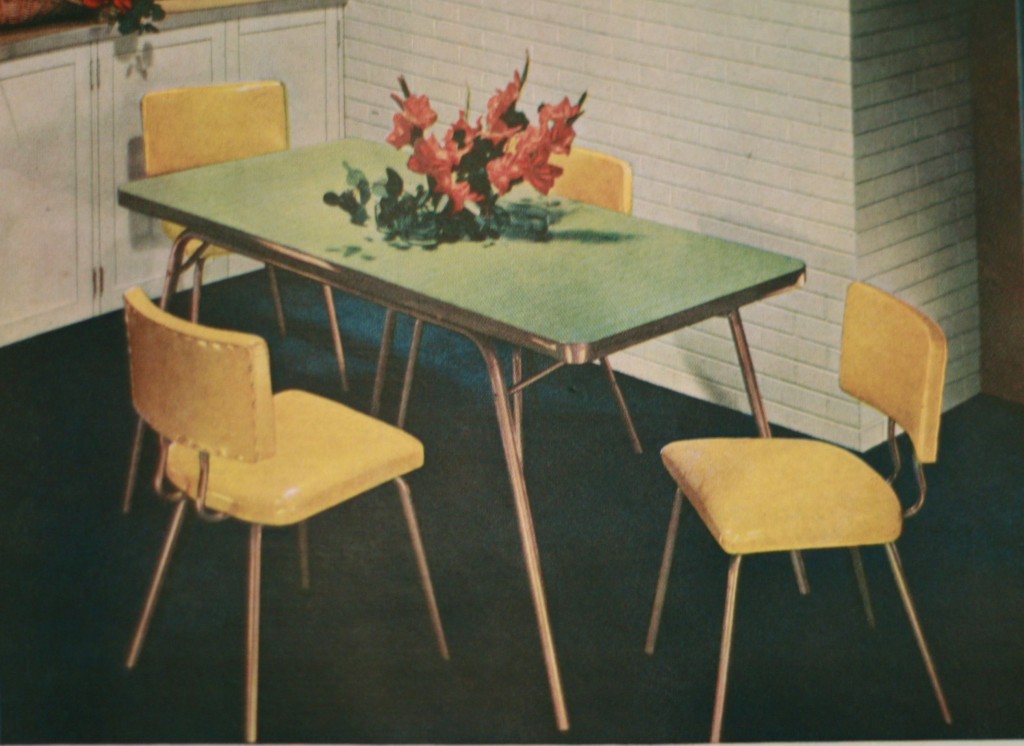 This was 1950, man.  No one could force you to have your table and chairs be the same color.  NO ONE!

Chrome table sales seemed to die off a bit in the late 50’s, when “the look” leaned more toward the Eames / Danish style.  The old tables of yesteryear are becoming increasingly hard to find in decent condition, as it seemed that they became relegated to acting as garage junk tables or were stuffed in the barn in favor of newer modern styles.  Remember, though, that there are many places that still allow you to customize your own chrome table and chairs.  If you’ve admire the tables, then I encourage you to get one.  You’d be surprised how many times you find yourself just gazing at the table, thinking about how cool and shiny it looks in your kitchen or dining room.

2 Replies to “The evolution of cracked ice and chrome”