A year and a half ago, we had our kitchen and dining room area redone.  Rather, I should say that we had a dining room created out of an adjacent bedroom, so our kitchen area was essentially opened up to allow more than 5 square feet for dining space, which is about what we had before.  With my husband and me and our two little ones, this just was not working.

Here’s what the kitchen looked like when it was completed and the chrome table had arrived: 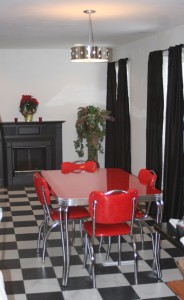 I liked it well enough, but after a while those white walls just seemed too . . . well, white.  I didn’t want to introduce too many different colors into the kitchen/dining room, for I already had three going on: black, red, and white.  But the walls — they needed something.  I just wasn’t sure what they needed.

Fast forward few months later . . . I’m at an antique shop, and I find this clock buried under other junk in a box: 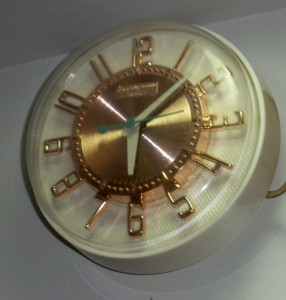 It worked and was in nice condition, and I thought it would look good in my kitchen.  After all, my kitchen had a plug up near the ceiling for just this sort of clock.  Obviously, my kitchen had a void that needed to be filled, and was the solution.

I noticed how much I loved the color of that second hand.  It’s kind of a turquoise/jadeite color, and the more I looked at it, I realized that it was that color that would provide a great contrast to the colors already in my kitchen.  However, being the indecisive person I was, I decided to sit on it for a little longer — as in, another year.

By the spring of this year, the white walls were literally driving me crazy.  My kitchen needed something!  I finally decided to take the plunge, and vowed that as soon as school was out, I would paint the kitchen.

What I discovered upon painting the kitchen is that 1) I should have painted the kitchen a loooooong time ago, and 2) the color, rather than making the kitchen seem too color-chaotic, made everything come together, and really set off the red of the table.   The finished product (the dining room area): 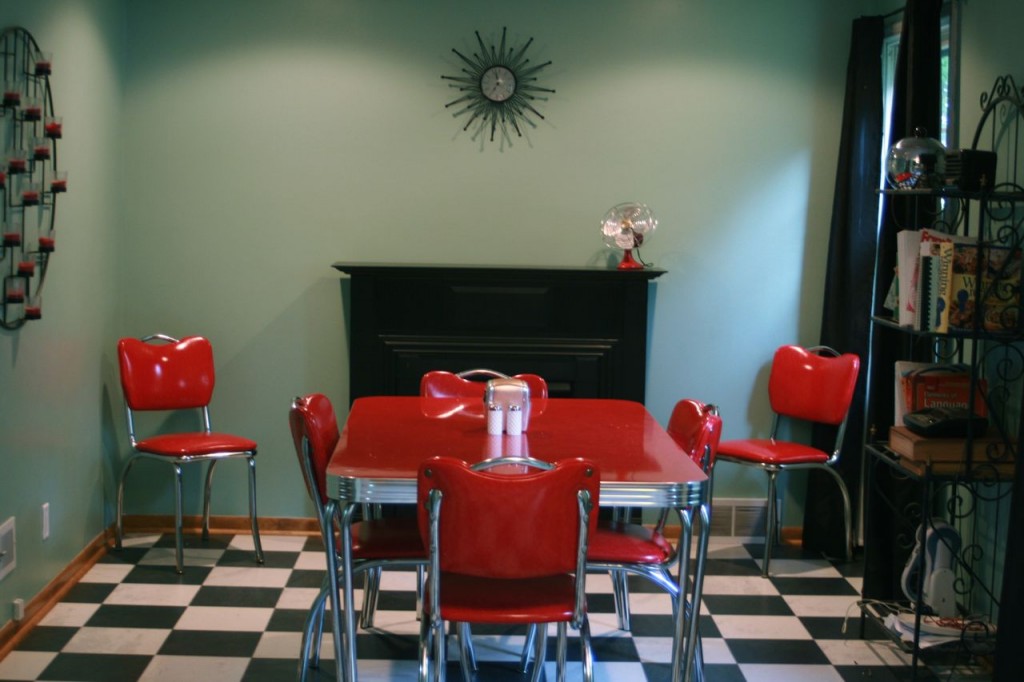 The good news is that I love my kitchen and dining room area anew; the bad news is that it’s started me on a painting rampage, and my house looks like a war zone from everything being taken off walls, moved around, shoved in closets, destroyed, etc.

4 Replies to “A little color for the kitchen”