I’ve gone years without making ice cubes.  After being introduced to the wonder of automatic ice making from a fridge I had in an apartment in the late ’90s, I became jaded about making ice the old fashioned way.  May I mention that the old fridge in my apartment was the last fridge I had with an automatic ice maker.  Then came marriage, babies, and a string of cheap fridges.  The one I have now was one that I purchased after our fridge konked out during a heat wave when my kids were small.  Time was of the essence, money was short, and life was hectic, so we bought a fridge locally that we could afford.  This means that I have a fridge by the brand name of Estate.  Apparently it’s a product of Whirlpool, but still.  Estate.  It’s a fancy name for a not-so-fancy fridge.

For years I kept a grocery sack full of old plastic ice cube trays.  How I collected so many, I have no idea, but I have a sneaking suspicion that I inadvertently took the ice trays from the apartments I rented during college.  As a result, I ended up with at least a half dozen, if not more, and they sat in my basement for eons, collecting dust.  I finally gave them to Goodwill last summer, impatient at seeing them and not having a use for them.

Of course, the rule of thumb has always been that I will throw something out just before I find a use for it, and this time was no different.  A few months after that, I suddenly had a craving for iced tea.  Considering it was summer, that’s not really odd, but I had always, up to that point, been an iced tea hater.  I tried it many ways — with lemon, with sugar, with sugar and lemon, etc., but to no avail.  I always hated it.  Then, one day, I just wanted some, so I bought some of the cold brew tea bags and whipped up a pitcher of it.  With enough lemon (I’ve become addicted to lemon juice), I found that I liked it a lot.

But with a penchant for iced tea comes a need for ice, and I had no ice trays.  Sure, I could use the bagged ice, but that tends to leave a fishy aftertaste in drinks sometimes.   I happened to be browsing vintage items on Etsy and I ran across some rather cute little aluminum ice trays, and I thought — that’s it!  Not only would the ice trays be functional, but they would satisfy my fetish for all things retro. 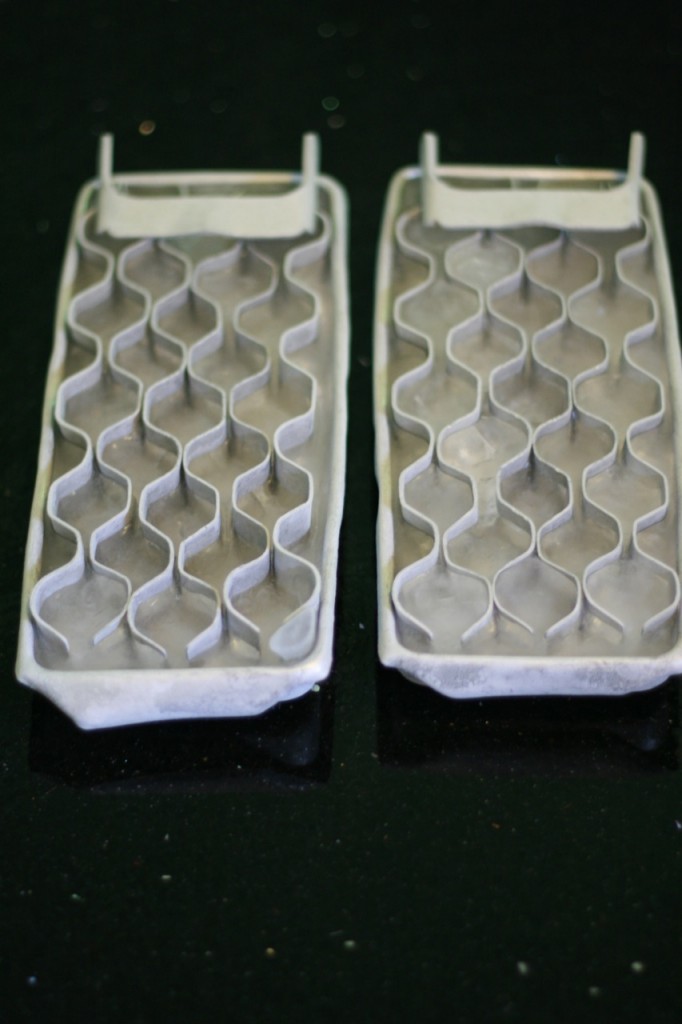 I dislike huge ice cubes, and this set made smaller cubes that were more to my liking.  What I’ve found is that aluminum trays, while not always easy to deal with, are definitely more efficient at making ice.  The aluminum gets colder than plastic and thus freezes the cubes even faster.  I have not tried any larger size aluminum trays, so I don’t know if the levers on those are easier to deal with, but the little levers in these guys are a pain in the butt to lift up.  Basically I have to take a butter knife and pry the levers up, then I use the end of the butter knife as a mini hammer to get the cubes loosened from the aluminum.  I look like a murderous freak trying to get the ice

cubes out of the trays, but it’s worth it.  I love the smaller cubes and the ability to make several trays of ice in a day in order to fill up my ice box.

I see that Jack’s Country Store has new aluminum trays, and I am thinking of purchasing a couple more, as the continued beatings of these trays are doing some damage.

The thermometer is climbing to 80-something today, so I think a pitcher of iced tea is in order.  I’m off to grab a knife and whack my ice cubes into submission.  Wish me luck.

**UPDATE**  I bought new versions of these via the Vermont Country Store.  I will be returning them tomorrow.  TOTAL JUNK!  The handles are made of such thin aluminum that they bent when I was trying to lift them up and loosen the ice.  Common sense would say that the handles should be studier than the rest of the tray, but I am not really surprised.  Guess I’ll have to get some more vintage trays.