I’m gasping for air here, and unfortunately, it’s not because I’ve been running miles per day.  It’s the spring semester, which means I have composition classes, which means I spend most of my free time correcting.  I try not to think about it, but the math is staggering.  Seventy kids total, with a new paper coming in roughly every 1 1/2 weeks, and it takes me about 30 minutes to correct and comment on each one via Google Docs.  Basically every 1 1/2 weeks I need to find 35 extra hours in order to correct papers.  Nevermind that composition is just one of the 3 classes I teach.

Let’s just say that the papers are winning the war.  They really are.

Anyway.  Short post today, for reasons I described above.  I’ve been meaning to share some of the photos I’ve found on Shorpy.com — some of the ones that I could easily get lost in because they’re such a unique moment frozen in time.  There is one, however, that is my current all-time favorite: 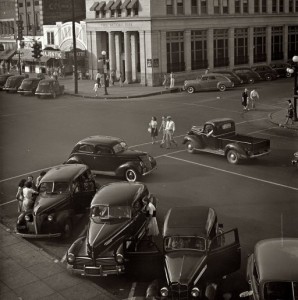 If you want to see the full size, go here and click on the picture.  I’m planning to get a large print of this as soon as I have money lying around that isn’t marked for other purposes.  (Yeah, good luck with that, self.)

But the picture — it’s so perfect.  Everything is in focus, the Majestic Theater is in the background, and all the cars look rather cookie-cutterish, but that’s part of the beauty of the photograph. Symmetry.

There’s the farmer with his arm hanging out the window, toolin’ around town on a Saturday night.  There’s the stately First National Bank in the background.  The cars make the scene look like The Godfather has called a meeting somewhere secretive (the bank, of course), and intense instructions are being given within.

My favorite part of this photograph, however, is in the foreground.  See the girls clustered around the car? See the girl inside the car who is laughing and giggling with her friend?  It’s a mystery who’s with her in the car.  Could be Dad, or it could be the boyfriend.  Saturday night socialization is happening, and those girls are taking part.

Don’t even get me started on the clothing.  Everyone’s all doozied up for Saturday night, which is definitely something one doesn’t see by observing the street on a Saturday night.  Not that I’m dressed to the nines every time I step foot outside my door, but man, it gets old seeing enormous sweat pants and Loony Tunes T-shirts as people shuffle around in their worn-out flip-flops.

This photo represents a slice in time, and I’m glad I was “there” with them on this Saturday night in Florence.