Oh, it’s been a busy couple of weeks!  Semester tests occurred the last 3 days before Christmas break started, and then as the break grew closer, we in the Midwest became aware of a humungous snowstorm that was headed our way — the worst one in years, the chatter among the locals said.  Indeed, as December 22 came upon us, it was painfully evident that yes, there was a storm on the way and that traveling might be a wee bit tricky.  Freezing rain occurred on the 22nd, making things interesting right off the bat, but we knew more was coming.  Lots more.

As soon as school was out on the 22nd, I grabbed the kids and headed to South Dakota.  3 1/2 hours of driving on ice-covered roads!   Thankfully, I and my sister’s family were able to get to my parents’ house safely.  And then we waited.

All hell broke loose about the time that my dad’s side of the family arrived on December 24th to eat Swedish meatballs and drink punch.  The wind started blowing and throwing snow in every direction.  By the time everyone left a few hours later, some almost got stuck heading out of the driveway.  Luckily no one lives farther than 2 miles away in any direction.

It was an interesting Christmas, to be sure.  14+ inches of snow with major drifting all around.  Even leaving back home 4 days after the blizzard, I saw that the roads were drifting back shut in spots.  We are getting more snow as I write this, with 1-2″ expected.  Yikes!  I love snow, but even this is becoming a bit much.

I received some great retro items for Christmas, along with some Etsy purchases that are on their way to my house.  (I fear that I am becoming a Pyrex junkie; however, that is another entry in itself.)

The best gift, however, is from my sister, who sent me a picture out of the blue with a picture that said, “These dishes — like ’em?”  My jaw dropped when I looked and saw a plethora of Blue Heaven dishes.  It turns out that a friend of hers received the dishes, but did not really like them (most guys don’t give a rip about dishes — imagine that!), and my sis was willing to pack up the whole lot and send them to me.  Merry Christmas to me! 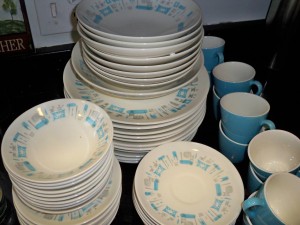 Stay tuned as I unpack and marvel at all my retro Christmas goodies!

One Reply to “Diggin’ out and checkin’ in”