I love perusing through 50s magazines, but there’s one detail that has started to disturb me. I understand that the ads of the day wanted to portray a feeling of happiness. After all, a new dishwasher = happiness, does it not? END_OF_DOCUMENT_TOKEN_TO_BE_REPLACED

Last Monday, I got a call from my contractor that said he could start as soon as we could give him a check for materials so Menards could deliver sometime this week. One problem: we’re waiting on the bank. Actually, we were waiting on one final estimate. In fact, we waited for that estimate all week! Finally I just wrote down a number that was at least twice as much as the job would actually cost (shower install) and gave the numbers to the bank. Now, we wait.

Oh, it’s going to be a good day when that money comes through. I’m going to be ordering that cracked ice chrome table faster than a wino hits the jug. END_OF_DOCUMENT_TOKEN_TO_BE_REPLACED I really hate having the A/C on 24/7, but I do so for my husband’s sleeping comfort and for the kids. Oh, all right, I guess I don’t exactly want to be sleeping in a room clogged with 80% humidity, either. But it makes me feel like such a wuss. It’s almost as I can hear one of my Swedish ancestors while he shakes his head, muttering “WE didn’t have air conditioning when we lived in the log cabin, and we survived just fine.”

Then I realize that my Swedish ancestors probably would have sawed off their right arms in order to enjoy A/C in the middle of a Midwestern August, and it makes me feel better.

(Now, if I can only get my ancestors to quit talking to me, I can shake this guilt complex once and for all.)

END_OF_DOCUMENT_TOKEN_TO_BE_REPLACED

When I’m not agonizing over flooring, I’m agonizing over lighting. Realistically, lighting shouldn’t be such a big deal, because lighting is undoubtedly more easily changed out than flooring. But still … my greatest fear is that I get all these cool lights installed and then I look around and think, “Whoa … what was I thinking?” Worse yet, I fear that I have someone over to visit after the remodel and they do that stone-faced look while saying, “Uh, it’s …. different.” Not that I have any friends who would do that, but still, the fear is there. END_OF_DOCUMENT_TOKEN_TO_BE_REPLACED

The other day I documented all the evidence that the former owners of this house had PINK on the brain. END_OF_DOCUMENT_TOKEN_TO_BE_REPLACED

I hate looking at design idea books. Oh sure, they’re nice for oooohing and aaaaahing over, or mentally collecting names of products you’d like to use (but can’t afford), but they’re just impractical for someone like me. Y’know, someone who has cabinetry from Sears with early American hardware. It’s END_OF_DOCUMENT_TOKEN_TO_BE_REPLACED

Oh, there have been other things, of course. The basement was tiled so we no longer had any more water problems, the roof was reshingled, the bedroom was recarpeted to remove the PINK carpet that plagued this home, and numerous other minor details. Now we’re ready for the big stuff, and I’m kind of scared. END_OF_DOCUMENT_TOKEN_TO_BE_REPLACED

I expected something different. After prying up the existing vinyl flooring, I have discovered that my horribly decorated bathroom has burgundy tile, black trim, and, underneath the current floor, this: END_OF_DOCUMENT_TOKEN_TO_BE_REPLACED 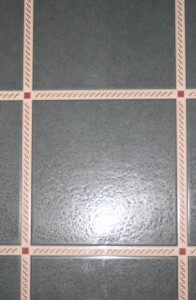 One of my biggest fears will come on the day that the custom countertop guy comes to install the Silestone. Why? One thing I never realized before is that the former owners had the new (ugly) tiled countertop dropped over the old countertop.

One can still see the outline of the rounded edge of what had to be a good old 50’s Formica countertop (the metal around the edge is gone, alas). I had noticed the outline before, but didn’t think much about it. When the countertop guy commented on it, my mind started racing. What if those countertops are the coolest retro thing I’ve ever seen? What if he pulls off the tile overlay and there exists something like this?

You know what I love most about this picture? See the “Early American” arrow cabinet hardware? See my earlier post about said cabinet hardware? Now do you see why my mind is flirting with the possibility that my kitchen may have looked like this back in 1953?

I know, I know, the Silestone is beautiful … and whatever’s underneath is surely ruined beyond repair from the new countertop existing (and being adhered too) the old one. I just can’t help but wonder.

I’m thinking I should be conveniently out of town when the countertop guy comes a’callin’. I don’t even want to know what I’m missing.