Warning: count(): Parameter must be an array or an object that implements Countable in /home/crackedice/www/www/wp-content/plugins/post-plugin-library/common_functions.php on line 174


You know that sick feeling that you get when you realize (albeit too late, as your gut tells you) that there’s something you should have done, but you neglected to do it? I felt that tonight.

Disclaimer: The term “tonight” refers to the hours between 5 p.m. until 11:59 p.m. This does not imply that the author of this post [known as “Post Author”] has known a separation between traditional waking hours and sleeping hours. Post Author has experienced an uncharacteristic bout of insomnia that has rendered her sleepless during those hours in which one is usually sleep, including, but not limited to, the hours previously noted as falling under the category of “tonight.”)

Anyway, I experienced a sinking feeling about 8:00 p.m. — that sinking feeling that one could categorize as “eBay Anxiety.” There were some 1950’s trays, you see, that would have completed my existence as a collector of all things 50’s. They were so . . . well . . . atomic. Black trays. Gold starbursts. Atomic up the ying-yang. Yet I never placed a bid. Why? Well, I think I have an eBay sickness.

Yes, this sickness renders one incapable of making eBay decisions. These were classic trays that (I believed) encapsulated the 1950s. Everyone would want them, right? So I made a Strategic eBay Decision. I would bid at the last freakin’ minute! Yes, that would teach them, would not? Don’t mess with a 30-something mom from the Midwest. Nooooooo-sireeeee. Don’t you dare! I will swoop in with that last-minute bid and you will pay for your poor decision-making skills!

Yet time marches on, and march it did. It marched so far and so quickly that I narrowly missed the closing bell of this eBay gem. 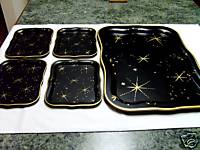 Beautiful, are they not?

See the bruises? I kick myself.

One Reply to “eBay regrets”