I have written before about my WNAX cookbook collection.  The proof:

I started collecting these books by accident after discovering one in a box of stuff from my great aunt’s estate sale.  I started leafing through it and was amazing how such a small little cookbook packed so much information in it.  Each one had letters from listeners, pictures of events and ones that listeners had sent in, recipes, household hints and tips, and favorite verses.  The older ones especially were a treasure trove of history — the letters from the war wives expressing their gratitude for Wynn Speece and her radio program are very interesting to read.  The radio was not just a source of information — it was a friendly voice to keep lonely housewives company.  People who had never met Wynn Speece wrote her heartfelt letters about what her program meant to them, and she always wrote heartfelt replies back.  Try getting THAT out of today’s radio hosts.  🙂

After I discovered how wonderful these cookbooks were, I started collecting them, intent on getting as many of the early ones as possible.  For some reason, the cookbooks got less interesting in the 60’s.  Eventually they stopped publishing letters from listeners, and I can only imagine that the popularity of TV quickly replaced radio and that no one really took the time to actually write letters as often.  I concentrated on getting as many of the 40s and the 50s that I could.

A couple years ago, I had all of the 1940s and the 1950s, but I was missing one — the very first edition of the cookbook from 1941-1942.  Oh, how I wanted that, but the auctions I stumbled across for one usually ran into the hundreds of dollars.  I couldn’t justify spending that much for a cookbook, no matter how badly I wanted it. 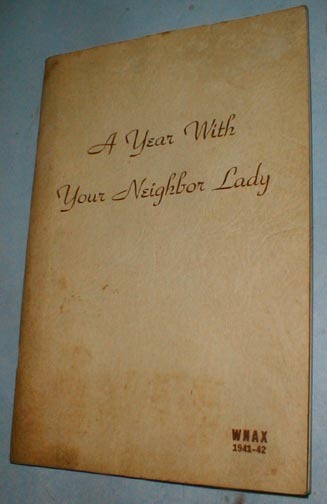 Fast forward to a few days ago when I accidentally stumbled across one on eBay.  The auction started at 12.99, which was really low for something that rare.  I added to my watch list and honestly forgot about it until I received a reminder email from eBay yesterday.  I checked on the auction and noticed that there seemed to be a few interested people and the bid was slowly inching its way up.  I got discouraged, because I have never had good luck with contested items on eBay.  Someone always swooped in and got the item at the last minute.  However, I had a moment of clarity.  I’ve been looking for this book for many years.  Here it is in front of me.  What is it worth to me?  I set my max bid and hoped it would be enough to deter all the other bidders.

Long story short, I won the auction and I have the final book in my collection on its way to me.  The good news is that the auction didn’t get close to my max bid AND the book sold for under a hundred bucks — a rarity for this item.

When it gets here, I’ll be sure to post some pictures from the contents!

In my quest to collect these books, I’ve also ended up with some duplicate books. I am selling a couple of them at my Etsy shop, so if you’re interested in checking these books out or starting a collection of your own, they’d be a good start.  The books I’m selling are from 1950 and 1951.