I was a bit of a late bloomer in the Craigslist department, for the few times I had gone there before, I never found anything that I really wanted.  A couple of months ago, however, I started getting into a record player phase, and Craiglist delivered like Domino’s in that department.  I picked up a nice little hand-cranked unit in Sioux Falls, and then I discovered a 1962 console record player in Mankato, Minnesota.  It had the lighter wood that I desired and was more compact than the monstrous ones of the ’70s, so I was sold on it immediately … and it was sold to me.  Behold the beautiful machine: 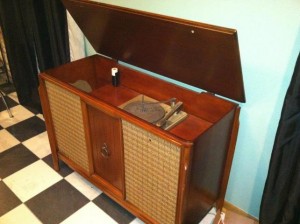 A friend and I made the trip to Mankato a few days ago, and in addition to picking up the console record player, we found a few other retro goodies as well, like THIS SIGN! 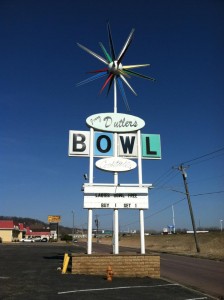 The antique store we were headed to just happened to be on this little access road that ran by this beautiful relic, and I immediately requested for my friend to pull over so I could jump out and admire it close up.  I only wished that I had seen this sign at night, for the neon covers the entire starburst and I’m sure that it twinkles like a star. The BOWL sign has two panels that must have been replaced with white rather than colored background, but the two remaining colors make it look retro enough.

While we were shopping downtown, we asked an antique store owner about the cafe next door.  “It has 1950s food at 1950s prices,” he stated.  It didn’t take much more than that to sell me on that food.  I wish I had taken a picture of the menu, because he was not exaggerating.  Much of the food was under $2.00!  A cheeseburger cost $1.70.  My friend wondered how this place stayed in business with prices like that, and we discovered that the answer lay in the magic of smaller portions, for the cheeseburger was pretty tiny and came with a smattering of onion rings.  Then again, I have a feeling that these 1950s prices offered 1950s portion sizes as well.  No super sizing happening here!  One reviewer urbanspoon.com mentioned that it usually takes “many things” ordered in order to fill him up.  Sign of the times, I suppose.

Truthfully, the food was nothing special.  It was a quaint little place that had been stuck in time for ages, and that was neat to see.  It was a little portion of Lost America that is hanging on by its fingernails, and I will always be the biggest cheerleader for that.

Before eating at the cafe, we walked by this book store and were charmed by the sight of a cat milling around the books in the window.  Indeed, the Once Read Bookstore has two “shop cats” who are fairly friendly with customers.  This is a good old fashioned bookstore, with books crammed in every nook and cranny. They are organized by topic, but not organized much after that.  One just has to find the right topic area and let your eyes do the searching for something you just can’t live without.  I walked away with a biography about F. Scott Fitzgerald and some sniffles from the kitties that I was allergic to.  However, I would be the last person on earth to complain to a shop owner that his cats make me sniffle.  I love these old bookshops that are creaky and dusty and, in this case, filled with cat dander.  I’d prefer that in an instant over a sanitized Barnes and Noble.

Don’t get me wrong — I love Barnes and Noble for a multitude of reasons, but there’s something very … um … American-ish — maybe small town-ish — about cats roaming around a bookstore.  There’s no government gestapo telling this guy he can’t have a cat in his business because some random person might have an allergy.

Truthfully, I think the incense pouring out of the hippie shop next door was more toxic than the cats.

2 Replies to “A retro trip to Mankato, Minnesota”