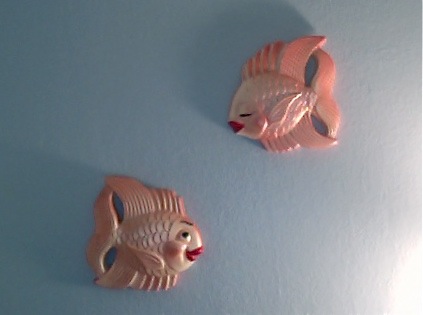 These fish are more special to me than the ones I posted about previously.  These have been in storage since the late ’90s.  They’ve been through four moves with me since that time, including the past ten years in my current house.  I never wanted to hang them up, though, because they never seemed to fit — either in theme or in color.  I was never in the apartments of my youth long enough to even think about unpacking these delightful fish, and it only took me, uh, ten years to strip off the ugly basket-n-bunnies wallpaper in our bathroom, where these fish now live.  Now that the walls are a nice, calm, “bathroom blue,” the fish can now come out and play.  They were an afterthought, however, because I originally hung up the blue fish that I talked about in my previous post.  Once those were up, I felt inclined to hang up these fish as well, even though they don’t really fit in with the other colors of the bathroom.

These two fish were given to me by my grandmother, who had them hanging in the bathroom of her lake cabin.  When I was a little girl, I used to love the fish.  They had become indelible part of the lake cabin — always there, always in the same spot.  The last time I visited the cabin in 1997, I felt sorely disappointed when I went into the bathroom and realized that the fish were gone.  My grandparents were in the process of selling their cabin that year and were slowly taking down decorations here and there for storage.  Several months later, my grandmother surprised me by presenting me with the fish during a visit, remembering how shocked I was that they weren’t on the wall during my last visit up there.

And so the fish have traveled many roads with me — literally and figuratively.  I had never really looked closely at the fish before, since my penchant for retro didn’t truly start emerging until a few years ago.  While hanging the fish up the other week, I noticed that they’re actually signed and dated: 1954, Miller Studios.

Given the fact that my little ranch house was built in 1953, I’m thinking the husband and wife truly feel at home.  🙂