But alas, it is true: I have found myself scouring Ebay and Etsy listings, looking for the perfect Pyrex to adorn my kitchen.  The days leading up to the new year found my husband and me majorly “mucking out” our kitchen — making way for the new Blue Heaven dishes and getting rid of stuff I just didn’t use.  You know what that meant — an excuse to fill that space back up with new stuff.  Or should I say “new” stuff?

I hadn’t really given much of a thought to Pyrex until lately, when I noticed a few retro designs on Etsy and began to imagine my kitchen filled with such patterns.  Years ago I had acquired a set of Cinderella casseroles from my great aunt’s estate auction, and I never have liked them.  Avacado green.  Need I say more?  The Pyrex Love website calls the design “Square Flowers,” and even they are a little mystified by the design and its origin.  No one seems to know the exact name of the design.  Says Pyrex Love:

We finally (6/07) put together a full set of the Verde Square Flowers Round Casseroles. It’s so strange how this pattern seems to be relatively common, and yet its official name is still up in the air – I wonder if the real name is listed in the Corning Museum? Some day we’ll have to make a trip there just to check that out!

Whatever the name, the pattern is just plain ugly and does not fit in whatsoever with my 50’s kitchen.  So I started looking through patterns categorized by color on the Pyrex Love site, and I came up with some ideas.  In the space of an hour I had located and purchased 4 different casseroles in three different patterns.  Schizophrenic?  Perhaps, but there were so many different patterns I liked that I couldn’t just adhere to one.

The first one I purchased because it matched my black and white floor in my kitchen.  I had often admired my mother-in-law’s turquoise snowflake patterned Pyrex, so I was excited to see that the same pattern was offered in black and white as well.  It’s interesting to note that this casserole (as were most of the ones I purchased) was called a “Space Saver,” when in reality it’s a big and bulky as most other casserole dishes.  Not sure what Pyrex was thinking with that idea.

The next one I purchased was another promotional Pyrex offering that Pyrex Love calls “Green Wheat.” This one is actually an early 60’s design, but I fell in love with the deep teal color with the gold wheat pattern on top of it.  It’s such a great color, and very retro.  My picture makes it look a tinge more turquoise than it actually is.   This model originally came with a candle warmer cradle, but mine, of course, lost its cradle decades ago.  That might have to be my next quest soon.

This is my all-time favorite, and not just because I’m a sucker for almost anything with a starburst pattern on it.  The color (again, my pic doesn’t accurately represent the color) is a light turquoise.  The starburst pattern is gold, and the contrast is as beautiful as it is in the green wheat pattern.  I wish they made a whole line with this color and design!

One more retro find that I’m absolutely thrilled about is my butter dish.  I’ve been looking for an entire year for a butter dish that was vintage yet represented the look I desired.  After a year, I finally found what I was looking for: 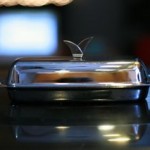 Isn’t it cool?  I was so excited when I found it.

Wait a minute . . . I just wrote that I became excited about a butter dish.

The young person who still lives inside me is screaming in agony.

One Reply to “I’m a Pyrex junkie”